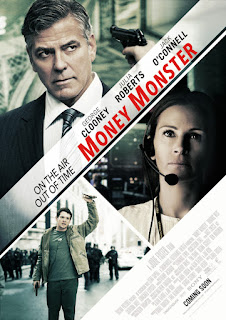 Imagine another movie about Wall Street that works. (The other was THE BIG SHORT of course.) MONEY MONSTER has a plot without too many surprises, but is still engaging (and at times compelling despite its often heavy handed attempt to make it about "real" people's "real" concerns), because Jodie Foster directs it like a pro and gets two of the best to carry the thin plot and they make it work like magic.

I have never been disappointed by going to a movie starring George Clooney. He's the consummate movie star, always handsome, always charming, even when playing smarmy or clownish (as he does here), but always conveying with great emotional precision the exact mood his character should be expressing.

When I first got into film acting seriously, and even carried the leading man role a few times, I remember saying to people that now I understood why the big stars get the big bucks. That shit is hard to make look so easy. And Julia Roberts matches Clooney so well, just watching these two old pros work was worth the price of admission to me.

But there's the added delight of almost everyone being cast well and pulling off each roll with few exceptions, especially the newish Jack O'Connell (the half Irish half English actor who played an Italian-American in the Angelina Jolie project UNBROKEN) and the Irish actress Caitriona Balfe (from the cable hit OUTLANDER). Unfortunately Dominic West (from THE WIRE) is a bit miscast as an elite financier, but he does his best which is pretty good.

In the end, it's shot, edited, acted and directed with fluency and panache. Can't wait to see what Jodie Foster gets to direct next.
Posted by Lally at 8:28 PM