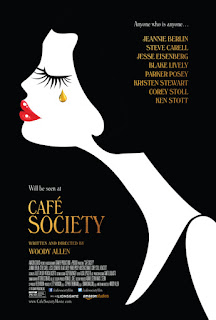 As I've written before, I have never been disappointed by a Woody Allen movie since PLAY IT AGAIN SAM. Some are much better than others, and several are masterpieces. CAFE SOCIETY isn't among his classic achievements, but like all his flicks it's entertaining and engaging, even if slight.

If you had told me who was playing what character in this fable of 1930s Hollywood and Manhattan, I'd have said they're mostly miscast. Except for Jesse Eisenberg as the Woody-Allenish lead. But Blake Lively as the second choice love interest? Kristen Stewart as the first? Steve Carell as a classic Hollywood mogul? Etc.

But there's a reason why most film actors want to work with Allen, he always brings the best out of them. I was never impressed with Kristen Stewart and didn't get her appeal at all, especially as a romantic lead. But I'm impressed now and I do get it. In fact CAFE SOCIETY is worth watching for the performances alone. If I tried to isolate one or two, like Corey Stoll's or Jeannie Berlin's (or Parker Posey's or Anna Camp's) I couldn't do it, obviously.

And there are even a few jokes that hark back to Allen's early years as a stand up and some of his monologues in the leading roles of his earlier films. Those too are worth the price of admission for any Allen film fans, like me. Oh, and did I mention the gorgeous cinematography, and how much I wish some of those old-time styles were back again, at least sometimes (like the summer shorts Stewart's character wears that I remember finding so alluring when I was a boy).

The theater in Jersey me and my friend saw this in was so packed (after we had to wait because even though we got there an hour and a half before the showing we wanted to catch, it was already sold out, so we had to get tickets for a much later one) with mostly greyheads like me, that there actually was a feeling of opening night electricity. Pretty good for what? his thousandth movie? (Not, but he sure has been prolific and continues to be.)
Posted by Lally at 5:03 PM

eisenberg and stewart were the romantic leads in the period [1987!] film ADVENTURELAND [2009], an under appreciated film of love's first stumbles. worth checking out.