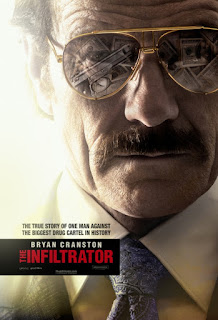 So-so movie with a few reasons to watch. On the big screen for Bryan Cranston's mug, and Juliet Aubrey's. They've been trying to make a movie star out of Cranston since his mega TV stardom from BREAKING BAD, and THE INFILTRATOR is just the latest attempt. Because the directing and writing is a mixed bag, it'll probable fail. But seeing Cranston's multi-lined aging face on the big screen I found pretty fascinating, like an old time movie star.

As I also did Brit actor Juliet Aubrey's too beautifully subtle performance probably for the small screen, but a wonder to watch on the big screen (she plays Cranston's character's wife enduring the tension of his undercover drug cartel customs officer work).

There is also some excellent screen acting work from the usually reliable Amy Ryan, Olympia Dukakis, John Leguizamo and others, including an old Hollywood friend back in the early '80s, but who I haven't seen in person or on screen in what seems like forever, Michael Pare (remember him?) whose small supporting role performance is worth the price of admission.
Posted by Lally at 1:42 PM