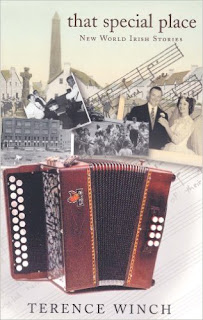 I have a few shelves of favorite books that I reread now and then, and my dear friend Terence Winch's memoir about his life as a writer and player of traditional Irish music (most famous for creating the now Irish standard "When New York Was Irish"), THAT SPECIAL PLACE, is one of them. I love all of Terence's books, mostly poetry, but this one touches my heart even more than his other titles.

That's partly because, though he's a few years younger, we both come from large Irish-American families in which we are the youngest and lost our mothers too early in our lives (him when he was a teenager, me in my early twenties) and were raised in an Irish immigrant culture (his parents came over, my grandparents who lived down the street did).

But above and beyond that personal connection, there's the beautiful writing in THE SPECIAL PLACE. I chose to reread it this time out loud, in fact for the benefit, I hoped, of a young poet/writer I'm mentoring, Rachel E. Diken (check out her twitter haiku-a-day site HAIKU AVENUE), and was delighted to see that she got the humor and the pathos of Terence's writing, as well as the brilliant subtleties and not-so-sutbtleties.

THAT SPECIAL PLACE would be among the handful of books I'd grab if I had to choose only a few possessions before running from my home. If you're interested in Irish-American culture and history, or just like great writing and unshowy, clearly rendered memoirs, I highly recommend finding a copy of THAT SPECIAL PLACE on the internet if you can, I think you'll be happy you did.
Posted by Lally at 2:17 PM

Hey, man---I just saw this on Facebook and was knocked out. You're the best. Don't know what I'd do without you.

and the great news is, it seems to have generated renewed interest in the book from some readers...which is all we ask for...