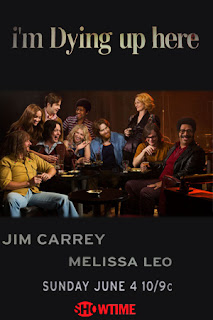 I'm hooked on the new TV series I'M DYING UP HERE, despite its flaws. Set in the early 1970s L.A. comedy scene, it would seem by the poster above that it stars Jim Carrey and Melissa Leo. But after the first four episodes Jim Carrey's involvement seems to be mainly as creator and producer, or one of them.

Melissa Leo plays the tough New York raised owner of a comedy club (based on, I assume, the owner of The Comedy Store on Sunset Strip back in the day) but despite some good if obvious writing and set ups, and her excellent track record as a brilliant screen actress, she seems to me to be working way too hard to emphasize the New York tough survivor boss lady crackin' the comedy whip.

I once met Leo, had lunch with her and some other folks, and if she just played the woman I encountered that day she'd have the right presence and toughness the character requires, as well as the individual, not stereotypical, physical traits and gestures. But the rest of the cast is pretty spectacular for my taste. With cameos by great older actors like Robert Forster, Cathy Moriarity, Obba Babatunde, Alfred Molina, and more. It's been worth watching, for me, just to see them work out.

Among the mostly young, less-known actors that make up the ensemble, Ari Graynor, who plays the main character among them, is the main reason I'm hooked on the show. Playing a budding second-wave feminist in what at the time was predominantly a male scene, she is pure talent playing and evoking just about every emotion on the spectrum, including getting laughs for her stand up.

The show mostly takes place in the comedy club and includes snippets of the young comics' acts, as well as cameos by actors playing more famous comics of the time, like the then blazing Richard Pryor, and the dean of late night, Johnny Carson. It probably helps that many of the actors playing the comics and peripheral characters are also writers themselves. Among them is Al Madrigal, who is credited with writing many episodes of the first season.

The mix of history, and real historic characters among the fictional ones, as well as the dynamite ensemble work and flashes of comic brilliance (though some of the jokes thud, as in real life), has me looking forward to the rest of the episodes on this first season.
Posted by Lally at 11:13 PM