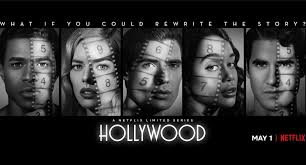 I binged Ryan Murphy's Netflix series HOLLYWOOD last night, as if it were a very very long movie. It's a mishmash of things to enjoy and things to shake your head at (or at least my head). Most of the older actors kicked ass in their roles (Holland Taylor, Joe Mantello et al.), with Dylan McDermott's performance the best—or at least most-fun-to-watch—of his career (full disclosure: he was a good friend in my Hollywood years and even directed me in a revival of the Miguel Pinero play SHORT EYES).

Among the younger actors, Jake Picking's fictionalized version of Rock Hudson seemed to get the period aspects best. A few of the others came across to me as kids playing grown ups, whereas in the Hudson character that fit best. There was a lot of anachronistic physicality (as well as language) misplaced in the late 1940s setting of the series, which could have been called ONCE UPON ANOTHER TIME IN HOLLYWOOD.

Like the Tarantino film, HOLLYWOOD captures a lot of the historic characters and scenes that reflect their respective eras, and both posit alternative happier endings to actual historic events. But where Tarantino's movie altered one crucial fact to the end of it, HOLLYWOOD offers multiple alterations to the "Hollywood endings" (the happily-ever-afters dictated by the movie censorship code enforced at the time) for all the many characters in the story.

The main thing missing from HOLLYWOOD, that Tarantino embedded in his, is the fear that drives every decision and action in the real Hollywood of the studio days, and still in my experience. In Murphy's alternate universe, all that fear—let alone deeply embedded prejudice in individuals, society as a whole, and the legal system—dissipates with just good intentions. It's an admirable ambition to rewrite history for a better outcome, but can also seem glib and dismissive of those who are still struggling with the same racial and gender and sexual barriers to fulfilling their Hollywood dreams.

[PS: I arrived in "Hollywood" in 1982 with a screenplay based on my time stationed in the military in South Carolina in 1962 when it was the most completely segregated state—legally!—and I was engaged to a "woman of color" (as HOLLYWOOD anachronistically would call her). People with the power to get a movie made, including heads of studios, wanted me to write scripts for them based on my screenplay but wouldn't green light my story because they believed movie theaters in the South would boycott it. (I actually tried to convince Ray Stark, then head of Universal, that the South would welcome an interracial love story). And though I had "starred" in a couple of low budget horror films, as an actor I was told my being public as a poet and writer and activist about having affairs with men, as well as women, eliminated me from consideration for romantic leads. So creating an imaginary alternative universe set in the 1940s where those kinds of barriers could be pretty easily overcome, though fun to imagine and watch, feels like an easy bit of the same kind of escapism old Hollywood excelled in, rather than a impetus to break the barriers that still exist.]
Posted by Lally at 3:36 PM