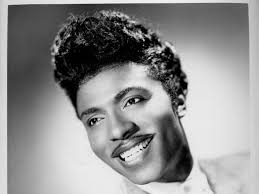 I was thirteen and living in part of the attic of my family's home, the first space I had to myself in my life, my two oldest brothers long gone and one older sister in a nunnery, my other older sister in her own room and another brother in his. I had rebuilt a radio I found in a neighbor's trash and would lay in bed at night listening to the Newark R&B station, being schooled as a poet and musician by songs like Hank Ballard's "Annie Had A Baby" and Ray Charles' "I Got A Woman" and especially Chuck Berry's "Maybellene"...and then "Tutti Frutti" came over the radio and it was a whole new world.

I never met Little Richard or saw him live that I can remember, but still remember his first appearance onscreen in DON'T KNOCK THE ROCK, an otherwise pretty boring movie until Little Richard appears. In the Newark theater I saw it in with a little gang of fellow thirteen-year-olds the older teens started clapping and dancing once he started playing and singing. The next rock'n'roll movie we went to see (for Frankie Lyman and the Teenagers) they had cops lining the inside of the movie theater to avoid dancing, but older teens still jumped into the aisles and started jitter bugging, and even after being escorted out by the cops more teens would do it until the cops gave up.

That was the power of rock'n'roll and the impact of its most dynamic practitioner and co-inventor. Rest in that Power, Little Richard.
Posted by Lally at 6:04 PM