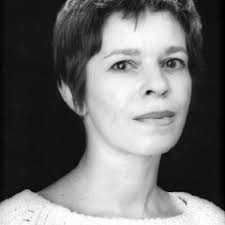 This is the only photo I could find online (don't know who took it) that comes close to how I remember the great painter in the years when we were close friends, the late 1970s-early '80s. We both were living in what was becoming known as Tribeca before John Belushi and Robert DiNiro started buying buildings there changing the real estate values and population of the neighborhood.

I paid 200 bucks a month to occupy (illegally then) 1800 square feet of an old industrial loft space (toilet in the hall) for me and my son Miles pre-1980 and then my daughter Caitlin as well post-'80. My girlfriend Rain lived with us for part of that period too. Susan and I first bonded over being two of the few single parents in a sparsely populated area back then. Her daughter Maggie was a familiar presence in our lives.

I have a lot of stories about that time, but here's two that came to mind first. Susan told me how she and her husband broke up after a female gallery owner came to their loft to see his work and ended up more interested in Susan's work, taking her on and in the process wounding her husband's ego (she didn't put it that way but the circumstances confirmed it for me).

Another time she came over to my place very upset because she had been invited to a dinner party uptown with wealthy art collectors and other VIPs and her gallery owner wanted her to go. She was angry about the pressure of having to be on display and what she would wear and how she'd have to behave, to the point she became determined to quit the gallery and leave New York.

I reassured her that my experience (having gone through some version of that a few years before as a downtown poet) helped me see that they didn't expect her to dress like them or behave like their upper class jive but instead to be the artist and be nothing like them. So she could go as she was, with her seemingly home-made pixie haircut in her usual jeans and sweatshirt smoking her unfiltered cigarettes and not say a word if she didn't want to. She calmed down and went to the dinner, but a decade later after marrying fellow artist Bruce Naumann, she moved with him to the dessert Southwest leaving New York for good.

Condolences to Maggie and all of Susan's family, friends, and fans of her art.
Posted by Lally at 4:56 PM