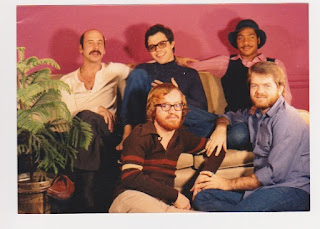 In March 1972, I "came out" to myself and the world, and as an ally and activist with the Gay Liberation Front in DC (just in time for the first Gay Pride march) where members of the collective known as Skyline Faggots were at the forefront and were an inspiration to me. This is a photo of them at that time, in the back row: Will, Tim, and Ted, and in front another Tim and Michael. I was closer to some than others, and Michael Sun Bear Ferri I'm still in touch with, but they all (along with a few others including Jimmy Fourrat, Bobby Miller, and the late Ed Cox) helped change my life forever. These were some of the brave pioneers of Gay Pride.
Posted by Lally at 12:29 AM