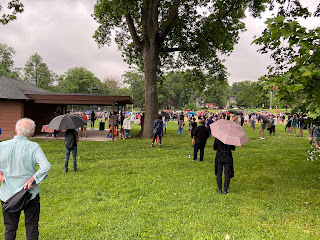 The old man with the umbrella behind his back is me keeping more than the recommended social distance at a vigil for Breonna Taylor organized by young people of color. It was poignant and inspiring as many people stepped to the mic to share their thoughts and experiences.

Breonna Taylor's death is emblematic of all that's wrong with policing. The law the cops were supposedly enforcing shouldn't exist: all drugs should be decriminalized (see Portugal). The cops came in the middle of the night, not in uniform, did not identify themselves. How is that in any way civil or even legal? And used lethal force, over a drug charge! Who, besides big pharma, benefits from making drugs more important than human lives? And when Breonna's boyfriend used his legal gun to defend her from what he thought were home invaders, the cops shooting as well, Breonna, the only one unarmed is the only one killed! Because as anyone who has been around real guns when people are shooting knows, bullets mostly don't hit what the shooter is aiming at (due to adrenaline, fear, excitement, confusion, and people moving). I was a marksman on the rifle range in the military despite despising guns of any kind, but doubt if I had ever seen combat that my marksman status would have helped. And when I've been shot at, luckily no one was hit. And as we all know the cops had the wrong apartment anyway and the guy they were after was already in jail! The kids who organized the vigil could have done better police work than that.

Breonna Taylor was a precious, accomplished, decent person killed in her own home terribly unfairly and absolutely unnecessarily, for what?
Posted by Lally at 12:53 AM