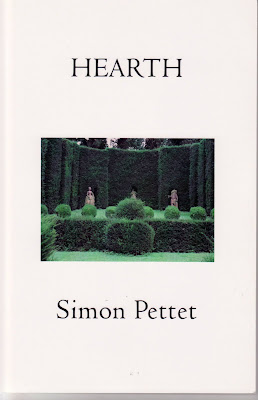 After the last post I thought I’d follow up with one on a book that no one would mistake for anything but. At 178 pages, HEARTH by Simon Pettet (published by Talisman House) weighs in as more book-like than most poetry collections.

As for the author, anyone who reads this post knows that Simon—originally from England but a fixture of the Lower East Side for many decades now—is a friend and a poet whose work I dig.

I’ve known Simon for almost as long as he’s been living in Manhattan. We have many mutual friends (and adversaries for that matter) in the poetry world and beyond. I have always loved his eccentric personality and approach to life and poetry (and that’s all meant as a compliment obviously, since I believe my own personality and approach to life and poetry can easily be characterized as “eccentric”).

But I must be honest and say that when I first began reading his poetry back in the 1970s, I didn’t get the power and originality of it at first. I got the lyrical qualities and the precision and craftsmanship. But the power of his approach to the question of what a poem is and how it works I somehow missed in those early years.

Not any longer. Well, not for a long time in my case, but not any longer can anyone miss it with the publication of HEARTH, which is basically the “collected” poems of Simon Pettet.

The poems are arranged mostly chronologically and include all the poems from his previous collections, as far as I can tell (I didn’t take them down from the shelf and compare every poem, because this is a personal blog not The New York Review of Books!). But the amazing thing is in reading it through from cover to cover—slowly, a poem or two each night before bed, savoring each line, each word choice—it all feels completely of the moment, present in every way, as does the poet in the lines and the stance and the perspective.

It’s an absolutely unique collection of poems, and that’s not something you can say that often. (I know there are those who think I get too enthusiastic about books and movies and music and art I love; I’ve been accused often in my life of going “overboard” at times in my praise, but loving too much doesn’t seem to me to be a negative thing, and I think I have enough experience, knowledge and intelligence to defend my taste even if in the end it always is simply a matter of taste.)

I suspect even those who might be prone to criticize Pettet’s minimalist approach to imagery and/or vocabulary and/or logic or high intentions, would be shouting his praises to the rooftops if this manuscript wasn’t discovered and published until after his death, ala Emily Dickenson, or in old age obscurity, ala Alfred Starr Hamilton.

But fortunately, that’s not the case. We can now praise Simon Pettet’s poetry as collected in HEARTH while he’s still with us and young enough to enjoy the recognition. Here's a randomly selected example of one of the kinds of approaches to the poem you'll find in HEARTH:

First of May, everything
conjugates the verb "to love" (amo)
Here are the roses
I am not in the middle of speaking
of anything else. 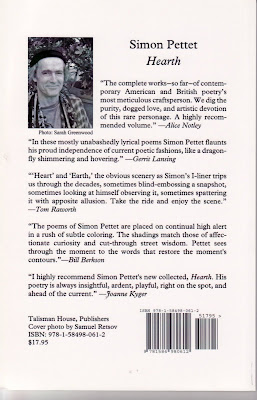 Here's the back cover of HEARTH, which contains blurbs written by a slew of poets whose work and opinions I care about and which, I think, perfectly capture the impact of Simon’s work on those of us who dig it, more so than most blurbs on the back of most books. If you click on it, it should enlarge enough for you to check them out.
Posted by Lally at 10:16 AM