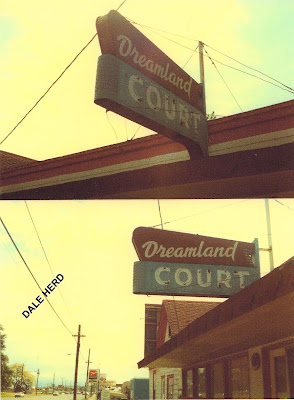 I first wrote about Dale Herd's fiction back in the '70s in a review in The Washington Post. I said he was "the Hemingway of our generation" and qualified that by pointing out what was even better about Herd's prose. (I wrote about him more recently in one of my early posts on this blog.)


I didn't meet him until the 1980s when we were both living in the L.A. area and writing screenplays [because our books didn't make enough money for us to live on, especially with kids]. He was then working on a novel called DREAMLAND COURT, which my second wife had a role in when a video of part of that novel's story was made.

We became friends after that and though we came from opposite ends of the country (him from the Northwest, me from Northern New Jersey) and had many differences in our backgrounds and experiences, we understood the the importance writing played in our lives and the hard work that went into it, at least for guys like us, and the guts it took to do it the way we saw we had to rather than whatever the trend or expectation or commercial desire was at the time.

I wasn't the only admirer of Dale's writing. Poet Allen Ginsberg said in an interview that Dale Herd was his favorite prose writer. And the same Northern California small press that published books by Gary Snyder and Robert Creeley (Donald Allen's The Four Seasons Foundation) and others, published Dale's first collection of short stories: EARLY MORNING WIND.

But DREAMLAND COURT remained unpublished though not unheralded. Anyone who read an excerpt from it anticipated its publication with great expectations. At least that was true for me and everyone I knew. But the format of the novel and its raw reality kept publishers timid, until now.

The rumor is that Coffee House Press is planning on bringing out Herd's earlier three collections of short stories: EARLY MORNING WIND, DIAMONDS and WILD CHERRIES (originally published by Tombouctou, the same small press that was publishing Jim Carroll's THE BASKETBALL DIARIES around the same time). Hopefully they, or someone else, will bring DREAMLAND COURT into print as well.

But in the meantime, the first chapter of DREAMLAND COURT has just come out as a "chapbook" from Blue Press Books in Santa Cruz. It makes me believe that Herd, who may just be our country's ROBERTO BOLANO, will finally get the attention and exposure his incredible prose deserves.

[Got some feedback from e mails and phone conversations questioning my comparison of Herd and Bolano. I only meant that the scope and complexity of DREAMLAND COURT, the whole novel, reminds me of the scope and complexity of Bolano's THE SAVAGE DETECTIVES. Not completely or in every way, but certainly in terms of the variety and amount of characters and their perspectives, etc.]
Posted by Lally at 8:39 AM