Hey, not to be all self-promoting but to help out the people who were kind enough to put out my latest CD, LOST ANGELS—me reading some of my poems from the '70s, 80s and early '90s to music by my oldest son Miles and some of his bandmates and musician friends in 1996—may I remind you that there's only fifteen "shopping days" left until Christmas?

So, even though I think it's a kind of unique recording and gift, if you've got adult friends who like some of the "artists" I've been compared to over the years by critics, interviewers, publishers and introducers, (and not necessarily all I would agree with though I'm flattered by the comparisons)—like Francois Villon, Walt Whitman, Allen Ginsberg, Jack Kerouac, Frank O'Hara, John Garfield, Frank Sinatra, John Coltrane, Mick Jagger, Charles Bukowski, Gil-Scott Heron, The Last Poets, Clint Eastwood, Sam Sheperd, and more I can't remember off the top of my head—you might consider giving them a copy of LOST ANGELS.

[Or even if you'd just like the photographic portrait done of me by the great film director Gus Van Sant around the time he was casting for DRUGSTORE COWBOY.] 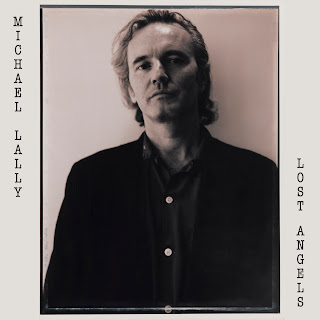 [PS: Some folks have let me know that Amazon and CD Baby are already sold out of LOST ANGELS (it was a small edition) so you might try this link to the label itself, Monomania Records.]
Posted by Lally at 7:33 AM