Got these two thin books (what others call "chapbooks"—meaning they don't have a spine, or what is called a "perfect binding," but instead the folios are just folded over to make four pages at a time and the binding is just two (or sometimes three depending on the page size) staples put in from the outside so that the exact middle of the book exposes the folded-in ends of the staples) in the mail not long ago and was delighted to.

I love both of these poets, Jerome Sala and Mark Terrill. Jerome is an old friend whose work I dug before we became friends (SPAZ ATTACK and I AM NOT A JUVENILE DELINQUENT were early favorite books of his). Mark I've never met and only communicated with over the Internet. But I've been following his writing since first reading his collection of prose poems: BREAD & FISH.

Now come their most recent collections of poems, both books only about 36 pages long. 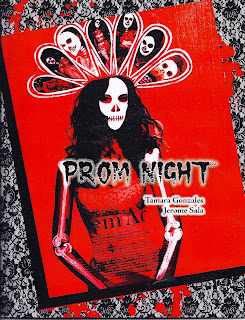 Jerome's PROM NIGHT is illustrated by Tamara Gonzales, the art and poems inspired by horror movies and science fiction. PROM NIGHT is composed of three serial poems: "Prom Night," "Lost Planet" and "Alien Race." Underneath the campy subject matter is a profound subtext articulated with lyrical panache. Here's an excerpt from "Alien Race:"

says the monster's creator
not "he's alive"
unless I'm wrong

this limbo state of reality:
that speaks to blind Will
more than human or supernatural lore

it's a sin to live

it seems
without definition
to move on pure ignition

minus romance
or even gore
a moving thing

but nothing more
obscurantist to the core!

a zombie
who threatens not by murder
but persistence... 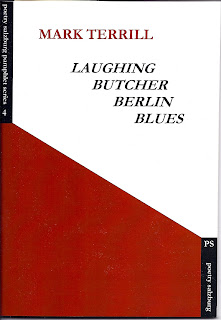 The poems in BREAD & FISH that first caught my eye, and made it one of my alltime favorite books, as I said were prose poems. And I have to admit, though I dig everything Terrill writes that I've seen, I'm happy to see that LAUGHING BUTCHER BERLIN BLUES contains nothing but prose poems.

In his poems, Terrill manages to make the everyday extraordinary and the extraordinary everyday. His background as an ex-pat living in Germany who's worked as a merchant seaman and cook, postal worker and rock band road manager, has given him ample subject matter, but it's what he does with it that makes his work so compelling and often enlightening.

Here's one of the shorter ones to illustrate what I mean:

A Poem for Those Who Mean Well

There's a big black bug with curved wiggling feelers brown filigree wings & long angular legs crawling across the inside of the kitchen window looking for a way out & not wanting to find myself trapped in a crippling stasis of voyeuristic entropy like John Wieners in his poem "A Poem for Trapped Things" I quickly grab a water glass & a beer coaster & gently & efficiently capture the bug & open the kitchen window & watch him fly out across the pasture toward the canal where some watchful-eyed hungry stork or insatiate bullfrog will probably snap him out of the air before you can say the words voyeuristic entropy.
Posted by Lally at 2:18 PM

It is rare when I see a movie that is worth my time. Breaker Morant and Gran Torino were such movies. "Get Low" which I viewed tonight is another. The great cast was led by Robert Duval and Bill Murray. The fact that I really liked "Gand Torino" and "Get Low" may be that I am attracked to familiar actors and end of life stories. It may also be because I am no longer a young buck.