ELINOR NAUEN'S SO LATE INTO THE NIGHT 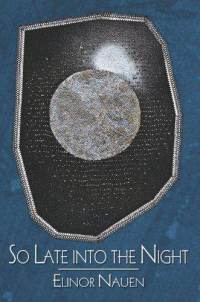 Poet/writer and friend Elinor Nauen has always been an original. But her latest book, SO LATE INTO THE NIGHT, is one of those unique creations that makes discovering them one of life's great pleasures.
What makes SO LATE INTO THE NIGHT so distinctive? Well, paradoxically, the first thing that's so unusual about this book-length poem is that it uses the same rhyme scheme that Byron used for his long poem DON JUAN.
Okay, you say, how does imitating the poetic structure of someone else's poem add up to something so seemingly unprecedented? Because of what she does with that form.
First of all a contemporary poem with DON JUAN'S ottava rima (a-b-a-b-a-b-c-c) rhyming pattern is unusual enough in these times, but to make it even more so, the requirements of the form cause Nauen to sometimes break the words in her conversational narrative flow in places no grammarian (or computer generated hyphenating algorithm) would ever permit. And her use of off-rhymes or near-rhymes or sight-rhymes, and more, delights in ways that compliments the irreverent playfulness of Nauen's autobiographical ruminations.
Second of all, and this may seem an awfully dated reality but, there aren't too many book length poems written by women poets, and none I can think of as lustily yet humorously graphic or sexually and sensually celebratory, let alone so biographically candid, as SO LATE INTO THE NIGHT (a lot of which can't be quoted in this family-friendly blog).
Reading this poem-book made me wish I could become friends with Elinor all over again, because she comes across as someone so funny and endearingly honest, even though with obsessions I don't share (like baseball and a certain player's bum). Just selecting some stanzas at random (I swear) I can find examples of her wit and openness (though this selection is more restrained than many others might be):
"Okay, so we've cruised on up to the park,
We've bought our tickets (your usual seat?
The seller asked) and strolled to where the arc
Of blue sky and insanely green field meet,
Scimitared by the curving of the dark-
White, roofless Yankee arches. Summer heat
Flutters as we climb up to our children-
Of-paradise seats in this great cauldron.
Not that while incorporating the -eet
Rhymes (above), I refrained from using the one
That would seem obvious, that is: Derek Jet-
Er. What is a jeter? One who jetes? Done
How, and why, do you suppose? With the feet?
Does it mean something in Romanian?
It would be too cheap a shot to put here
One more aside re Derek's divine rear."
Though she did it anyway, and got away with it. But don't let me give the idea this poem is all "light verse"—though Nauen does make a case for a positive and humorous perspective. She also addresses the challenges of living the life of a freelance writer and editor and poet on the Lower East Side of Manhattan, and of her marriage (to fellow writer Johnny Stanton) and of her discovery of a desire to study her ancestral (at least in part) Jewish faith, and her reaction to witnessing 9/11 from the rooftop of her tenement building and of the array of tragicomic characters who come and go there, and more.
But her tone is so open and inviting, her candor so humble (in the true sense of that word: i.e. realistic) and both expansive and inclusive, it made me wish the poem went on even longer. I think you will feel the same way once you let the rhythms of her poetic push for updated Byronesque exuberance take over your mind's ear and eye.
Here's another random sample that defends that perspective:
"Ennui or accidie was once a sin
And now an aspiration. Those who are
Melancholy look down on the cheerful in
Their 'shallowness.' Yet despair is not far
From forfeit. Why do people seem proud to hin-
Der good works and choose futility? Hard
As it may be to believe the world works
Well, it's worse to live where hopelessness lurks."
and this James Schuyler-esque riff:
"I remember standing in our driveway
On the first day of summer vacation
When the gloriously promising days
Stretched ahead. The peonies' libation
Of scent and ants shook pinkly. A blue jay
Rattled in the pine I climbed impatient
For a view. The lilies of the valley
next to the house, slightly off the alley
Would be gone by then—in spring I'd lie down
To drink their scent. I think no one else knew
They were there. Prairie sky above, a mound
Of cumulus clouds in billowing blue.
Plains are pure primary color. You drown
In floods of red, white, green and yellow, new
Every day, blown fresh by the eternal
Wind that swoops from vernal to infernal."
No stanzas I quote from can do justice to the experience of reading this flowing commentary on what it means to be alive, have a history that's still evolving including being a half-Jewish woman from South Dakota ending up on the Lower East Side of Manhattan with lusty appetites yet happily married to an Irish-American New Yorker while making a living as a freelance writer and editor and writing in an outdated form a book-length revealing poem that captures the temporal drive of an engaged mind as it mostly delights in just being alive and able to witness and experience and record what that's like in these times.
The only way to experience the fullness of life is to live it fully. The only way to experience the generative power of this unique poetic creation is to read it from beginning to end. I promise you'll find much to engage and delight you.
Posted by Lally at 1:25 PM

Wow. If I had not already read this book I'd accuse you of Hibernian hyperbole. But I have, so I don't. I join you in your promise to new readers! Yay Elinor. --Martha King

Glad you agree Martha. Hard not to, I think.

I wasn't sure that I could read a book-length poem inspired by Byron without a teacher forcing me to do it, but your review tempted me enough to try. I started yesterday evening and was laughing out loud in the "quiet car" on the train this morning. I love this book and Elinor. (In spite of the fact that baseball bores me to tears.)

Although it's just a footnote, I especially like the KOFF Manifesto. "...In your dull way, you can only admire my suffering, as you might admire a computer or a large, shiny car; I suffer for all of you. As you go daily to your draining and repetitive jobs, I feel the futility of your lives. "

Glad that recommendation paid off (this time) Tim. And that you find it as funny as I did. Elinor will be glad too.