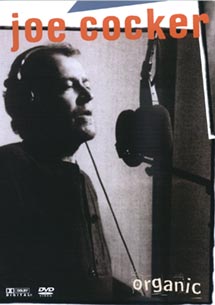 My old friend Tom Wilson, "Willy" to some of us, sent me this DVD of the sessions for a 1996 CD of Joe Cocker singing some of his hits and other tunes not necessarily associated with Cocker in entirely new arrangements.

Produced by Don Was, who explains to the camera that he did the project because someone said Joe Cocker is the best singer out there and he realized he agreed. And the sessions on this DVD certainly make the case for Cocker's being one of the greats of all time. He's one of those derivative artists who used to bug me when I was a kid. I'd be all about how he sounds like Ray Charles etc. this effin' Brit tryin' to come off like a soul singer etc. But the fact is, Cocker made that style his own, or rather he owns that style now as much as anyone.

The vocal control he displays in these sessions is impressive and at times even poignant. My friend Willy said this DVD had brought him to tears. And at first when I started watching it I thought that seemed a bit extreme. I was digging the musicianship—there's an array of stars with people like Randy Newman contributing piano to two of his own tunes and Billy Preston, once known as "the fifth Beatle" playing keyboards (organ and electric piano sound, I don't know what to call the variety of keyboards out there since I played plain old piano in clubs back in the day) making everything he contributes to more delicious sounding, to name just two—but then all of a sudden I was choking back tears.

Partly that was in sheer appreciation of the artistry of everyone but focused on supporting Cocker's unique takes on familiar songs. Like Preston's "You Are So Beautiful" which is familiar to probably all of us from Cocker's original rendition I used to play over and over again decades ago when he first recorded it, but in this session adds a whole new layer, layers really, because of the seasoning of age and experience and the ultimate outcome we're all facing.

There's too many songs to pick out only some, but damn, "Heart Full of Rain" and Newman's "Sail Away" cut to the bone. Let alone Jimmy Cliff's "Many Rivers to Cross" and the tears that aroused. But maybe my favorite, was Cocker's take on the classic Van Morrison song, the first one to cement Van's artistry as unique after his beginnings as an Irish cat appropriating "American" blues and rhythm and blues styles—"Into the Mystic"—damn Cocker makes it his own on this deal.

It probably works to just buy or download the CD version, but this DVD with the close ups of Cocker and the musicians' fingers and playing techniques or the gestures of the back up singers etc. as well as brief comments from Was and the musicians and Cocker, make the DVD a perfect gift (thank you Willy) for anyone, including yourself.

Exactly Robert, and Jen, thanks for the link, such a touching rendition, though on the DVD the sound was even more intimate and voice front balance that it felt like Joe was singing into my ear...

Here's a link which leads to many other links of Joe and also Leon Russell. Thanks Michael and thanks Jen for sending me to You Tube for a blast from the past!!!

check out his 'no ordinary world' album/cd.

YA GOTS TA CHECK THIS ONE OUT!!

Oh man, just watched that Joni Mitchell one Robert, a-effin'-mazin'! She's so young and seemingly tentative yet so focused and powerful in her artistry it counters every feeling I had back then which I am ashamed to say were that I recognized her musicianship but felt the message was kind of airy, didn't get how strong and solid her creations were with language as well as unique musical construction, and that voice, which almost bugged me at first when she was new on the scene was, I can hear from this, unbelievably musical in a precedent setting original way.

I sent you an email in response to your "Thank You" email to me for the Joe Cocker DVD, which I will share with others cuz it sums up my take on the DVD:

"Man, I'm so happy that you dug it. Cocker is fabulous, but it's the ambiance of the whole session that moves me, from Billy Preston's glorious playing with a smile to match, to Tony Joe White's song-writing to which he provides his own guitar riffs, to Don Was shaking his head in wonder and near disbelief at Cocker's phrasing and pathos, to the backup singers who are so obviously having a gas, to the tight, groovy rhythm being laid down by the whole ensemble, and of course, the insane joy of having Randy Newman showing up to sing and play. It's really hard to explain, but there is something about the entire package that is very special and so "less is more." Now that you've seen it, I don't have to explain, do I.

For those wanting to get the DVD,I got it at DVDPlanet.com.

Ok guys now I have all this music to check out & M I will just have to get Joe's Organic DVD then! Robert- happy You Tube brought some good memories back.( Im addicted to You Tube I think...) Last day @ school 100+ temp in the classroom no AC: administrative offices all AC- why??? And if any friends say teachers have the summers off- not true. Most teachers I know work in the summer....
ps- watched some amazing video of Billy Preston as a little kid also a great one playing with the Beatles...
Will forward to M if I don't expire before I can cool off/swim :-)

Okay, if you folks are going to play the Joni Mitchell card you simply must see/hear "Shadows and Light," Joni's September 1979 performance at the Santa Barbara County Bowl. She is absolutely at her most gorgeous, both physically and musically. About 30 minutes in she takes off her jacket, which always just kills me! It doesn't hurt to have a boatload of top jazz musicians backing her up including Pat Metheny, Michael Brecker, and Jaco Pastorius! Best of all, there is a pristine copy of the entire DVD up on YouTube, which you can find here: http://www.youtube.com/watch?v=G3ywUorI4S4

The opening, with clips from Rebel Without a Cause, and Frankie Lymon and the Teenagers is to die for, with other cool clips interspersed throughout. Robert, I'm sure you have seen Shadows and Light, but if not you will be a babbling love-sick mess after you watch it.

Willy- You rule! Don't know how Robert made out & I'll try not to babble, but after Joni's Shadows and Light, I'M a lovesick mess! Straordinaria!!! (Loved the clips too)