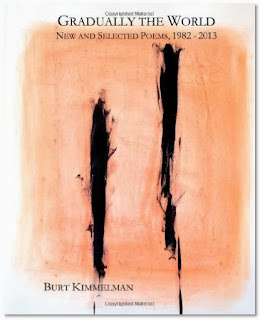 Last night, or technically the night before since I'm writing this after midnight, I attended the publication party at Poets House in Manhattan for Burt Kimmelamn's GRADUALLY THE WORLD: New and Selected Poems, 1982-2013. It was a pleasure to run into old friends and acquaintances, some of whom I hadn't seen in forty years. But mostly it was a pleasure to celebrate the poet Burt Kimmelman.

Over my lifetime I've met a lot of poets and some are cordial, some are distant, some are aloof and some are phony and some are just the kind of good people you like to spend time with. Burt is one of the latter. One of the nicest people in the poetry world, or the world in general for that matter.

He also is a good poet. There's a humility and decency that comes through in his work because it is true to who he is. He's a craftsman who works in the vein of lyric poets whose lyricism depends on subtlety and plainspokenness. Like some of the art and artists he writes about, as well as the poets and writers he references and uses quotes from for epigraphs, Burt prizes concision and open eyed objectivity.

There's many ways to approach a poem as the poet, and when they work they're all valid, though you wouldn't know that sometimes from the way so many poets swear allegiance to one, or only a few, ways and dismiss all others. A professor and scholar of poetry from all periods, but with a special emphasis on the Middle Ages, Kimmelman's expertise and knowledge are never front and center, but rather implied in ways that leaves the reader only aware of the subject at hand.

I might add that one of the pleasures of the event was not just Burt reading from the book but hearing the poet, writer and artist Basil King, another good man, who created the art for the cover and throughout the book, share how he did that and reveal this was his fiftieth cover since his first over a half century ago. I remember my first encounter with Basil's cover art for the then LeRoi Jones's PREFACE TO A TWENTY-VOLUME SUICIDE NOTE, a book I cherished.

But if I were to think of an artist whose work reflects some of the aesthetic approaches that Kimmelman's work takes, it would also include Edward Hopper. As in this example of the many short subtly lyric poems he writes (especially if you ignore the title):

On a Terrace, Waiting to Enter El Palacio Nazaries, Alhambra

A man reads
of the old
palace out
loud from his
French brochure.

His wife stares
across the
valley to
the mountains
in their snow.

That last line and the crucial and poignant use of the preposition "in" makes the poem work (though the set up is in the "His wife stares").

There's tons more examples like that, as well as longer poems that have a different approach to the poem. But I'll leave you with one more short one:

The tuft of Lavender
and little bees in the
sun, as if they were all—

how odd that somewhere there
might be another one,
the flowering of the

day, this sun, some other
place where we might sit for
a while, or never move.
Posted by Lally at 1:19 AM

Lovely poems. They have a "just so" quality that I appreciate in eastern poetry.

Lovely poems - they make me want to read more!

yes, he has a very quiet approach to the poem, subtle