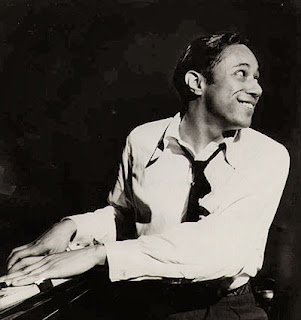 There was a notice of Horace Silver's death yesterday going around the Internet that turned out to be false.  But it made me realize how much his music meant to me when I was a young musician trying to make my mark as a jazz piano player.

I would have told you back then, and since, that my main influences and jazz piano icons were Thelonius Monk, Bill Evans and Ahmad Jamal.  I would have left out Horace Silver (and I later realized Errol Garner) who impacted me equally but because Silver (and Garner) were such low key nice guys, (Silver I know for certain, Garner I'm guessing) and I was a troubled young cat, they didn't register in the way say Miles did with his self-designed suits and shades and cool image etc.

But Silver was and is a giant of jazz, as those of us ho care have always known of course.  And I wanted to say thank you to him as a fan and admirer and appreciator of all he not only brought to jazz but to my young manhood.

And here's one of my favorite tracks from back then.  Listen to the whole thing, but especially when he begins to solo around three minutes in and with tact and taste swings the tune off its hinges with seemingly no effort.

Glad to hear that one of my all-time favorites is still with us. I still get out and play the album Tokyo Blues that I bought back in the early 60's and enjoy as much now as back then (despite all the scratches). And every time I hear the song Senor Blues (from a different album) it just cools me out.

One thing that always saddens me is when I turn on an FM jazz station at night and they keep playing music by one certain individual and I figure, uh-oh, so and so must have died. And it's usually the case.

But not always. Sorry to do this but here's an excerpt from a poem I wrote a few years ago which involves Jackie McLean. (The poem is called, "Life Is Strange, Weird & Creepy.)

I was at a friend's place
watching after his kids
because he was in the hospital.
I was sitting in the kitchen
writing poems on paper plates
because I couldn't find any paper
and I was listening to jazz on the FM radio.
They were playing without interruption
songs by Jackie McLean whom I love
& I thought, uh-oh,
the only time they do that
is when somebody has recently died.
Oh, no, I thought, not my Jackie!
Just then, something conked me on the head
& fell to the floor and smashed.
For no reason at all
the globe on the ceiling light
had come off as I was sitting under it.
Very strange. Very weird.
Maybe it was a sign from Jackie McLean
up in heaven
but the next day I found out
that he hadn't died at all.

But that was several years ago
& now he actually is dead
which makes me sad.

True story. Sorry to be going on and on and sorry to foist any poetry on you or your readers. As a rule, I don't do that but in this case it seems germane. And I think I'm drinking too much coffee this morning.

no problem Bob, all relevant and a pleasure to read

Lal--More outstanding Horace can be heard at YouTube on the Jazz Messengers' album, A Night At Birdland, especially in Horace's own composition, "Quicksilver," which also features amazing solos by Clifford Brown on trumpet and Lou Donaldson on alto.
Bob B.