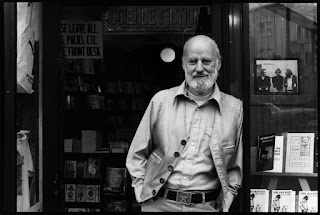 When I was a young poet in the late 1950s and early 1960s, Lawrence Ferlinghetti's A CONEY ISLAND OF THE MIND was said to be the best selling book of poems in the history of the USA. Which made me envious despite my then liking a lot of his poems. So I was both in awe of his accomplishment and mad about it when I went AWOL from the military in the summer of 1962 and ended up homeless in San Francisco for a few weeks where I spent a lot of my daytimes in Ferlinghetti's City Lights Book Store.

When I got out of the service in 1966 and ended up at the U. of Iowa on The GI Bill, he came to do a reading and I went to see him cause my then wife Lee loved his poetry, but I brought along the log on my shoulder. He read a poem called "Gone World" (as I remember it) to which I wrote a sarcastic challenge called "G'on World" (as I remember it, it's in my archives at NYU so this is off the top of my head remembering) that was immediately published in a proto-hippie magazine called GROCK, and I think I even addressed Ferlinghetti with my critique of his poem.

Then in the 1970s when I was living in downtown Manhattan, poet Barbara Guest invited me to a party at her apartment for Ferlinghetti, and he and I had a long talk including about a manuscript I had sent to City Lights (I'd sent a few by then but this was after Tim Dlugos had called my poem "My Life" the "Howl" of my generation and suggested Ferlinghetti should publish it, but he didn't). He was very sweet to me then and ever after, but never published me.

A few years ago someone pointed out that in the collection of Ginsberg's and Ferlinghetti's letters to each other, in one Allen suggests Ferlinghetti publish a book of my poems (I think by then it was the 1980s) and obviously Larry did not. When I read that, I first of all felt comforted knowing Allen wasn't just blowing smoke when he praised my work to me in personal conversations, but I also wondered why Ferlinghetti was always so sweet to me when I encountered him and yet so resistant to publishing me. And then I remembered that nasty poem I'd written and was published back in '66 and wondered if it had anything to do with it, or if it was just a matter of personal taste.

So that's my personal connection to this icon of 20th Century poetry and publishing. And despite my youthful arrogance toward him, it was an honor to have known him, and I'm happy he got to stick around so long.