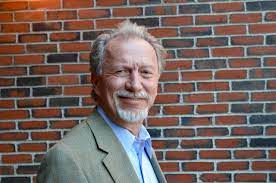 Gary Lenhart was a versatile human, but I knew him mostly as a poet and little mag editor and publisher. The photo (by Star Black) of him in later years shows his rugged handsomeness that always struck me whenever I encountered him in earlier years. As I wrote elsewhere, he was always a calm but radiant presence on the downtown scene and I admired him a lot.
I don't remember if in those days I told him the way I felt, probably not. My attraction to him probably kept me from saying anything. He was part of a slightly younger generation of, at that time, childless poets in the East Village and Lower Eastside, while I was renting an illegal loft in what was soon to be "tribeca" and raising kids as a single parent. That and, despite my bravado public persona, my natural inclination to not leave my nest(s) kept me from hanging out. But our paths crossed often in the poetry world and I was always happy to see him.

Here's a photo (I don't know who took it) from back in the day (c. 1980) of a poetry event at Books & Co. in uptown Manhattan with me looking up at the camera and Gary on my right looking at what I'm reading from, with Greg Masters behind my right shoulder and Steve Levine in glasses behind and to my left. Those were the days. He will be sorely missed by many, including me. My heart goes out to his family and friends. 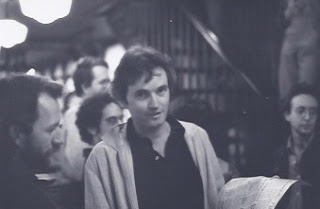 Here's a poem of Gary's from after he became a parent that I love: