It's about the writer Christopher Isherwood and the artist Don Bachardy. I think maybe it was the poet Ray DiPalma who turned me onto to Isherwood back in the 1960s. But however I got into Isherwood's books, they were a breakthrough for me back then.

I had a prejudice against upper-class Brits, coming from Irish-Catholic peasant roots. But I came to admire Isherwood so much as an original stylist of English prose, it helped me see through that prejudice to the common humanity underlying his characters, and eventually him.

I met him in the 1970s at a party in Manhattan, where he sought an introduction to me, for no other reason, I suspect, than he liked my looks. He was in his seventies but still vibrant and intellectually engaging. I dug him and we remained in touch through letters. He even recommended me a few times for grants and awards (that I never got).

When I moved to Santa Monica in 1982 with my second wife, one of the first things we did was go to Isherwood's house in Santa Monica canyon for dinner. That's when I met Isherwood's lifetime companion, Don Bachardy. Don was already well known as a painter, mostly a portrait artist. (His official portrait of Governor Jerry Brown caused some controversy because his style was too unconventional—he tends to use a lot of deep reds and yellows and blues in his painted portraits, not exactly skin tone—though pretty conventional compared to the art movements of his times, but always incredibly well crafted (though whether from the person "sitting" for so long as Don worked, or because of something he projected onto them, quite often the eyes in Don's portraits seem extremely sad, which Don almost never seems himself, he's so upbeat and quick to smile and laugh)).

Anyway, Don was an incredibly charming, handsome man whose accent was a replica of Christopher's, that is, upper-class Brit, even though Don was a Southern California native. But Chris and he met when Don was a teenager and Chris was thirty years older, so the influence of the older, upper-class, highly successful and admired worldly writer was dominant (although Don's youthful enthusiasm and vitality contributed I'm sure to Christopher's seeming so young for his age).

When they met, in the early 1950s if I remember correctly, both were relatively openly "gay" (though I think the word Don would use and does in the documentary is "queer") for the times and were smitten with each other for probably different reasons at first, but eventually their bond grew so deep—and weathered the usual relationship storms—that it blossomed into an almost mythical romance.

I know I was always impressed by it (one more argument for "gay marriage" since I, and a lot of "straight" men I know have been married more than once, unable to sustain a longterm relationship like Chris & Don and many other gay couples I know).

This documentary chronicles that relationship in a way that is so real it almost feels intrusive, except that Don's charm, now aged beyond Chris when I first met him, disarms any feelings of uncomfortableness over being let in on some of the intimate details of their lives together. 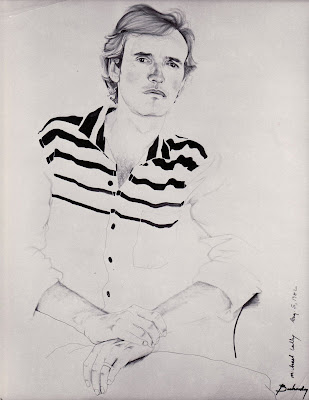 I sat for one of Don's portraits, on his request, not long after we met, and it was a way of becoming friends. I still consider him one, and one of the kindest most supportive of friends. I haven't been in touch with him since coming East except seeing him once or twice at events when I was in L.A., but he remains in my heart as one of the nicest and dearest people I've ever known.

The most moving thing about the film is the end, which explores the way Don coped with Chris's impending death over a decade ago now. Don asked Chris to "sit" for him (eventually only able to lie down) and made him his only subject during Chris's last months alive.

And when Chris finally did pass, early on a Saturday morning, Don continued to paint Chris's corpse, throughout that day, saying he felt it would have been what Chris would have wanted him to do, to do what "an artist would do" and he did (proving Chris's faith in him as an artist before anyone else, even Don, had that faith I suspect). For which we can be grateful, because the portraits Don made over those last weeks and then that last day are as unique a take on illness and death as any art ever produced, period.

The movie is compelling in that way all good documentaries about individuals can be, where you can identify with so much and at the same time discover so much that is unique you hardly can believe such people and experiences are real. But they were, and remain so in Don's art and Chris's writing and now in this highly recommended documentary (the animated sections alone make it unique, and will probably cause some viewers to think it's too precious, but precious has a lot of meanings and in this case it's the highly rare and highly valued one that applies.)
Posted by Lally at 2:06 PM

I remember reading lots of glowing reviews of this movie. The consensus on MetaCritic gives you the spectrum:

When you get to the MetaCritic page, click on the S.F. Chronicle review, which is the one I remember reading for sure. The "little man" is jumping out of his seat, which is rare.

Oh, and I love the portrait - very chic.

Coincidentally, Janet and I met the directors of that film on Sunday. Delightful people.

Glad you enjoyed the film - R