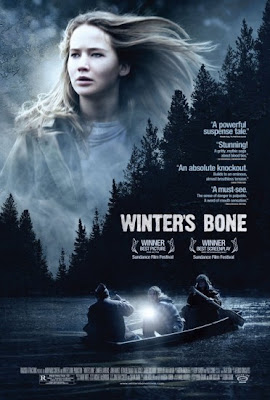 Everything I'd read about this movie proved pretty true in watching it.

The lead actress, Jennifer Lawrence—playing a seventeen-year-old "hillbilly" as rural folk in the Ozarks and Appalachia were disparagingly called when I was a boy—gives an award-winning performance. The stark "realism" of the story, the direction (and therefore acting, including several non-professional locals), the cinematography, etc. is brilliantly conveyed (even if the lack of any real humor undermines the idea of total "realism" for this locale where by the film's lights everything is deadly serious). And so on.

This was a favorite at the Sundance Film Festival and I can see why. It's so well-executed it's hard to believe that the director, Debra Granik, hasn't done much before this. She also wrote the screenplay with another neophyte screenwriter, Anne Tosellini, adapting it from a novel by Daniel Woodrell.

Though there are quibbles I could make with some aspects of the moviemaking, including some confusing elements in the plot, and there are similarly small, independent films it evokes—FROZEN RIVER being the most recent—WINTER'S BONE stands alone as an artistic achievement for my taste.

No matter how manipulated I felt by the soundtrack (including live music performed on screen) it was totally appropriate for the story and location and so good I intend to add it to my iTunes library immediately. And no matter how much I was aware that the man playing the lead's uncle "Teardrop" was an actor (John Hawke, who played almost the exact opposite type as the hardware store owner on DEADWOOD or Garret Dillahunt playing the sheriff's deputy who we've seen in many TV episodes but most effectively on another David Milch production JOHN FROM CINCINNATI) he did such a great job, or was directed so well, I was moved and startled and impressed by his performance and taken in by his character anyway!

I could go on with other aspects of the flick that had me observing the artistry as it was happening, but in the end the movie is completely worth watching, especially that justifiably much heralded lead performance by Jennifer Lawrence. If it's playing near you, try to see it on the big screen so you can totally immerse yourself in its ambiance.
Posted by Lally at 11:22 AM