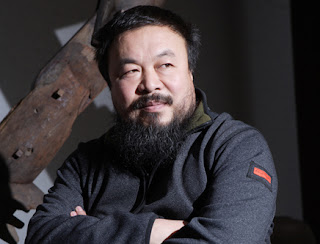 I'm sure you've heard about Ai Weiwei, the Chinese artist who is one of the most successful artists in China and the West. He's one of my favorite contemporary artists. His works are a radical combination of conceptual art and sculpture, performance art and sometimes (or always if you make the connections) politically provocative.

One famous and much imitated series of his called "Study of Perspective" is a series of photographs of his hand giving the finger to iconic places, The White House, The Eiffel Tower, Tienanmen Square, etc. Another is a Han Dynasty urn with the Coca Cola logo on it. His personality and presence are almost as impressive as his art, his wit, and his courage.

He uses social media really well and has a huge following on Twitter, and his international reputation seemed to protect him for a number of years. But he became interested in the 2008 earthquake in which a lot of shoddily built schools collapsed and thousands of students, mostly little kids, died. He wanted to make an art piece using the names of the victims but found out the Chinese government was keeping that information secret, for the usual state security reasons that all governments use as an excuse for secrecy.

In 2009 he was finally attacked by police in a town away from Beijing where he went to watch the trial of an activist trying to get the names of these student victims. The police beat Aei WeiWei so bad he had to have cranial surgery for internal bleeding.

Then about ten days ago he was on his way out of China with his assistant, when he was taken by the police and has not been heard from since. The Chinese authorities have been very nervous since the uprisings in the Middle East and have been cracking down on all kinds of activists and lawyers and artists and anyone questioning their authority or the ways they wield it.

It disgusts me, disappoints me, and saddens me that this amazing man is being held somewhere with no contact with his family or friends or lawyers or anyone outside of the police. No charges have been brought yet but they've said his crime is "economic" which usually means tax avoidance by people without the right connections (sound familiar?).

I've been thinking a lot about him, and about Private Bradley Manning. 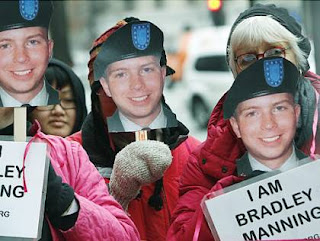 I don't have any personal experience with China, except friends who grew up there or moved there etc. But I do have some experience with the military justice system. And I am ashamed of my country for what it has been doing to Private Manning. He's supposedly the one who downloaded (or uploaded I never get this straight) the raw intelligence files to Wikipedia, files that had records of pretty much everything the military were paying attention to and keeping records on in the War in Afghanistan etc.

Some people see that as heroic. Some see it as traitorous. But no matter what you think of it, we have a constitution that makes our legal system pretty clear, but has made exceptions in the past for wartime actions that may harm our war effort or the troops themselves etc. But there is nothing in our history—in fact quite the opposite until the Bush/Cheney administration approved torture—to justify the fact that Manning has been held for ten months now in what amounts to permanent isolation, and at night he's also been kept naked, tactics that more often than not don't get prisoners to reveal secrets, torture rarely does, but does break them down mentally until eventually they become incapable of normal human reasoning.

This isn't to say that the USA is as repressive as China, though obviously in some ways we are, one of the few things we beat them in is the number of our citizens in prison. But the big imperial powers in the world right now are us and China, and we're both guilty of intolerance toward anything that threatens that imperial power. Which to me, seems pretty clear is based purely on fear, not a great motivator for right actions. In fact, acting out of fear generally leads to bad policy, Viet Nam anyone? Jim Crow? The Holocaust? The Iraq War (except that was faked fear, until everything went wrong)? Those who are falling for the fear mongering of the right? Et-endlessly-cetera...
Posted by Lally at 12:32 AM

I saw the comment before it was deleted. I understand the idea of national security, but at the same time when what goes on behind closed doors is based on deceipt and treachery, then exposing it in the name of honesty and impeccability is heroic.

Polls are selective, out of context, rarely represent a full picture of reality and thus are to be taken with a large grain of salt.

Sorry Robert. It's easy enough for folks to figure out what you're reacting to. But his comments are banned for a while. I haven't been feeling 100% and frankly just don't want that voice on my blog for now, it's too redundant and at times juvenilely insulting, nasty and aggressive (usually toward me) and the usual parroted lies and misrepresentations, and/or self-satisfied gloating over "facts" that are either totally incorrect or doubtful or from which you can draw various conclusions. We all know what his and the right's positions are and have been since he first appeared on this blog years ago and see enough of that jive all over the Internet and cable news etc.

No need to apologize Michael. It's necessary to refute and/or clarify things like parading alleged poll numbers as if they are some kind of gospel. It's like in court when the witness is order to answer "yes" or "no" only, a one word answer, to something that in reality in truth is much more complex, but the one word answer is then proclaimed the truth because of manipulated rules.

Totally agree. Bill Maher was really good this week, "Big Ed" from MSNBC was there taking on every innuendo, misrepresentation or outright lie Michael Steele, the ex-RNC chairman used to defend the right's positions on certain issues. Steele's "facts" were mostly feelingg based on rightwing propaganda but in the guise of reasonableness unless so perfectly refuted in which cae he'd lose his cool for that moment. And Maher showed the graphs that make it clear the deficit rose under all Republican administrations since Reagan and the economy took a downturn after tax cuts and rebounded after tax increases (something like five or six of the latter under Reagan!). Obvious stuff that because of the right's influence and manipulation of the media isn't obvious to most people.

Michael! Ironically, Frontline covered both of these subjects in our show a few weeks ago. You can watch the segments online here:

Interesting to hear your perspective on these subjects as well.

Katie, thanks for the link, I'm going to put it in another post to make sure people don't miss it.

correction: wikileaks, not wikipedia. many a security guard has gotten confused.