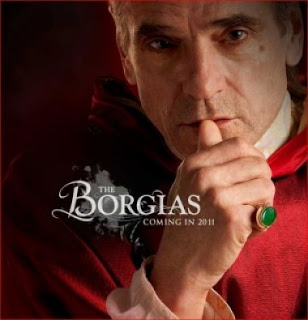 The new Showtime series, THE BORGIAS, is a little in the tradition of THE TUDORS, sort of part history, part soap opera, part recurring anachronistic moments, mostly in the language and behavior.

But it stars Jeremy Irons as Rodrigo Borgia, who in the first episode becomes Pope Alexander IV in 1492 (hmmm) and uses bribery, intimidation and murder, among other nasty tactics, to get and stay there. Though the murders are mostly plotted by his youngest son (you know the old time popes) who he historically appointed as a cardinal when he was only eighteen (though the actor playing him, Francois Arnaud, is in his mid twenties and at times looks like he could almost be in his thirties which is obviously the fault or choice of the creator of the show, Neal Jordan) and is even more shrewd and possibly more ruthless than his father.

Irons is surrounded by an international cast (mostly English, of course, that's the accent we want in our fifteenth century Italians just as for our BC and early AD Romans etc.) that serves him well, and the whole thing being a creation of Neal Jordan's is worth watching despite the melodrama, and too many moments when you feel like you're watching VALLEY GIRL or DALLAS sends their entire casts back to the fifteenth century.

Still, like THE TUDORS, or ROME, before that, it offers a lot of entertaining moments, though not always as intended.
Posted by Lally at 11:55 PM

Just that, if I remember correctly from my boyhood, 1492 was the year Columbus "sailed the ocean blue"—but this date that's significant to the Borgia papacy and thus the series, wasn't mentioned, so I was hmmmming about the possibilities not explored, but perhaps to be explored in future episodes, of the impact the "discovery" of "America" had on European relationships and the spread of Protestantism.

Never mind the son not looking young enough to match the historical record---the real Pope Alex was apparently grossly obese. I thought it would have been great fun had they put Jeremy Irons in one of those Eddie Murphy fat suits for this series.

Yeah, that was one of their "creative decisions" to cast Irons and not give him padding or cast some obese in the part. But that was true of the Tudors too, with the almost "beautiful" Jonathan Rhys Meyers playing fat and not so beautiful Henry VIII. It's a cable tradition now, though the Brits (or often the Irish speaking in their best imitation of the upperclass Brits who ironically oppressed them for centuries, basically because, dare I say it, there's more attractive Irish actors or Irish-descended "English" actors than there are attractive English actors) have been depicting the rulers of classic empires in Hollywood since sound was introduced into film.