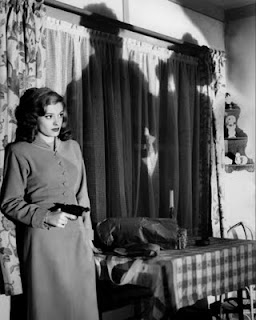 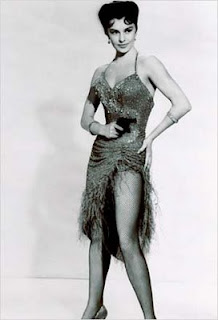 Busy couple of days, but I managed to catch some films on TCM as my reward. One is an old favorite, which Alec Baldwin and Robert Osborne, the hosts of TCM's "Essentials" cited as the best film noir: OUT OF THE PAST.

I also watched THE BAND WAGON, which I thought I'd seen before but except for a couple of the dance numbers between Cyd Charrise and Fred Astaire, I felt like I had never.

What struck me about both these films was the impact their female leads had on me as a kid, whether I was seeing them in first run movies or in repeats on TV: Jane Greer and Cyd Charrise.

These dark haired beauties (at least Greer seemed dark haired in black and white) epitomized a kind of feminine seductiveness coupled with a powerful sense of independence—they never seemed like they weren't ultimately in charge of their own fates—that I think I spent the rest of my life looking for.

It got me thinking about the influence of movies on my generation, and those before mine, when it was our main form of entertainment outside of the radio and eventually TV, but initially only the movies (and in some ways still) could not just charm and delight and engage and even enlighten me, but mold my ideals, particularly when it came to women.

I fell in love with both these women in these movies or scenes from them and many others they were in, and seeing them in these films just had me falling for them all over again, (even as "bad" as Greer's character is in OUT OF THE PAST where she plays a gangster's moll—Charrise plays one only in one dance number in BAND WAGON).

If I ever get around to making a list again, maybe it'll be of the women I've fallen in love with in the movies.
Posted by Lally at 1:10 AM

Lal--No.1 on your list, a huge A: Ava Gardner, especially in the voluptuary scene in "Night of the Iguana." And she still looked good in "Seven Days In May."
Bob B.

I'm with you on that one Bob.

Oooooo, that apache she does with Fred Astaire in Band Wagon is simply steamin'.
Bob B.

Mom and I watched Rita Hayworth (Margarita Carmen Cansino born October 17, 1918 in Brooklyn!)& Glenn Ford in "Gilda" the other day. Fabulous! My mother, and the women of her generation (yours), had an elegant beauty that mine does not. I know how made up these women were - but they somehow made it look natural.

Ain't it the truth.