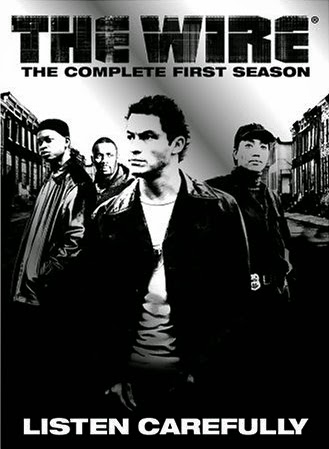 So I'm finally getting around to watching (and binging) on THE WIRE, the HBO series that many of my friends strongly recommended to me from the start.  I tried to watch some episodes early on and just didn't dig it so abandoned the effort. But I saw it was available on demand and decided to try again to see what all the fuss was about (some friends, with experience in TV and film, had told me it may be the best series ever, but certainly of its period).

I still objected to what had turned me off originally, which included implausible scenarios, over-the-top writing and performances at times (the main character, as illustrated by the poster above, is a supposedly Irish-American detective who is "real police" but comes across as part stereotypical Irish-cop-alcohol-lover loner anti-hero, and part blowhard self-centered narcissist I find hard to sympathize with), the de rigour gratuitous exploitation of naked female bodies (why has every dead female been found nude it seems in the first season?) and caricatures close to stereotypes in many instances.

But, I also see why people were into the show.  It's great story-telling in terms of a plot that builds a network of subplots which demand to be resolved, and there are some incredibly memorable characters (even if they are often asked to perform improbably exaggerated scenarios) and conflicts. Plus the dialogue is often juicily quick and theatrically "street" in ways only cable can do (sometimes brilliantly poetic, like the scene where the main detective and his buddy analyze the scene of a murder doing the kind of thorough and ingenious forensic work usually reserved to TV and movie detectives, but only using the word "fuck" (though at times combined with other words like "mother") by varying the ways they inflect and pronounce and express that single term so that one time it's expressing surprise, another time resolution, another amazement and just about every way you can think of...).

Either way, I seem to be hooked and assume I'll be watching it to it's final episode.
Posted by Lally at 5:13 PM

Best series I've ever seen. I loved The Sopranos, but The Wire was a notch better.

The wire totally rocks. One of my favorite shows, ever. You may recall my post of 4 years ago extolling Bunny's "Brown Paper Bag" soliloquy. Check it out at this link:

Just watched it again, and yes, it is pure genius.

Yep, that was a brilliant piece of writing Willy. I still have minor criticisms of some overblown or cartoony aspects of the show and the acting, but no denying it's compelling storytelling and there are bits that are definitely "pure genius"...