SINATRA: ALL OR NOTHING AT ALL 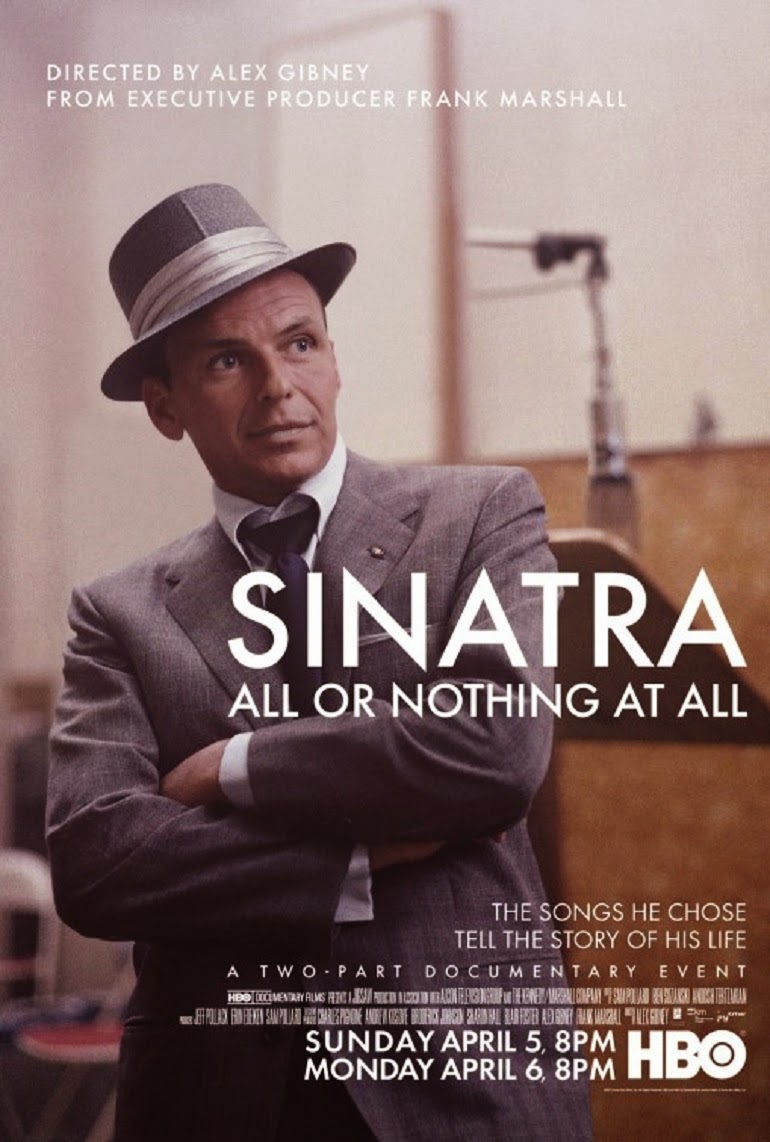 Talk about Jersey boys. Sinatra's voice (he was known as "The Voice" in his first incarnation as the greatest popular vocalist of the 1940s, taking the title from Bing Crosby, which led to confusion for me as a boy, cause Crosby was an Irish-American hero, representing the heights for our community back then, but Sinatra was a home boy, growing up in nearby Hoboken) was the dominant one, and still is, on the soundtrack of my life.

Friends and children and anyone within the sound of my voice has heard me go on endlessly about his amazing artistry. I've always been impressed with humans who can extend the natural talents of our species beyond what anyone previously thought was possible. The great artists and scientists and athletes and thinkers and leaders etc. Sinatra was one of those.

Crosby changed popular signing forever because he happened to come along when the microphone was invented so a singer didn't have to shout a la Sophie Tucker and Ethel Merman and others who broke into the entertainment business when being heard in the last row wasn't enhanced by electricity. Bing made singing intimate and personal, so the females swooned to the intimacy of his tone and the ease of his seemingly effortless control of the melody, influenced by the great African-American musical innovators.

Sinatra was influenced by Bing on every level, from treating his voice like a jazz musician's ax (the slang of his time and mine for a musical instrument) to the casual but perfectly groomed clothes styles of the era. But Sinatra was competitive, disciplined and tenacious in his persistent efforts to improve his technique until he had surpassed Bing, and he did.

The four-hour documentary HBO aired Sunday night and tonight (technically last night now)—SINATRA: All Or Nothing At All—in recognition that Frank would be 100 this year if he were still alive, explains some of the above to some extent, but more importantly it perfectly conveys the reality of Sinatra's importance and iconic stature in "American" (really the world's) culture.

It's directed by Alex Gibney, the guy that also did the recent HBO documentary about Scientology—GOING CLEAR—I commented on a few posts back. The guy can make a documentary film. The ingenious device for SINATRA was to use footage from Frank's 1971 retirement concert which he thought was his last (two years later he returned) so handpicked eleven songs to summarize a career that began in the 1930s. The order of the songs, at least as edited for the film, reflect the chapters in Sinatra's life by expressing the emotions connected to seminal events.

And intertwined with the songs and within them (the vocalizing hushed in the background or faded away) are snippets from various artists and family and friends about those seminal moments in his life, or from brilliantly edited pieces of various interviews Sinatra did for radio or TV or privately for his daughter Tina and others to create a beautifully, almost melodically paced narrative that recreates the impact of Sinatra's creativity and personality on his times (and mine, since his first hit came out the year I was born, 1942, and being a local Jersey boy who everyone was proud of, the sound of his voice was constantly on our radio and Victrola).

If you can get access to the film on demand and watch it from beginning to end (including the end credits please) you'll not only learn a lot about one of music history's most important artists but also about our country's and the world's history during the 20th Century. Informative, entertaining and engaging, is how I'd sum up SINATRA: All Or Nothing At All. Well worth seeing.
Posted by Lally at 1:39 AM

Not a fan of his big band/Nelson Riddle work but his softer "Wee Small Hours of the Morning" songs, of which there are so many, are just the best things on earth.

the man felt it,and made me feel it too

Got it all on the DVR just waiting. I'm really looking forward to it -- even more so in light of your post.