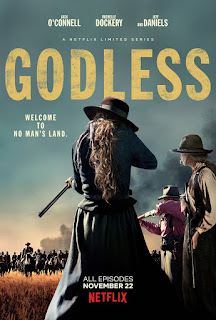 This GODLESS is a sometimes too dark Netflix 6-episode TV series with a lot of implausible and inconsistent plot points and scenes. But it is also beautifully acted and mostly beautifully shot and directed, so I found myself watching all of it but only feeling partially satisfied.

As is too often the case today, a lot of the actors in it were Brits, as if there aren't enough American actors. But two aging "American" once-leading-man actors—Jeff Daniels and Sam Waterston—carry the ball for our side and do a great job.

I never cared much for Waterston, and I acted with him on an episode of LAW & ORDER once. But in GODLESS, he actually does a great job, unexpectedly to me, playing an old Western lawman. I always love Jeff Daniels, but this is the darkest character he's ever portrayed and I was worried his genial looks and seemingly affable nature would get in the way, and it almost does at times, but he uses it and makes it work.

Michelle Dockery, of DOWNTON ABBEY fame, actually kicks ass as a widow with a native mother-in-law and half native son struggling on the prairie. But the great Tatoo Cardinal as the mother-in-law steals every scene she has anything to do with.

The revelation of the show, for me, was Meritt Wever playing a widow who transforms herself in the face of a husbandless future and almost manless town. The best thing about this series is their use of the usual old Western-film-genre tropes but with contemporary historic revisions based on what we now know were the much more common realities.

Especially that pioneer women were tough, out of necessity and circumstance, and pioneer communities included all kinds of people from all kinds of backgrounds from native American to African-American to gender-bending fluid Americans, and that corporate America was just as capable of evil then as it is now.
Posted by Lally at 11:51 PM