JOE WEIL AND ME 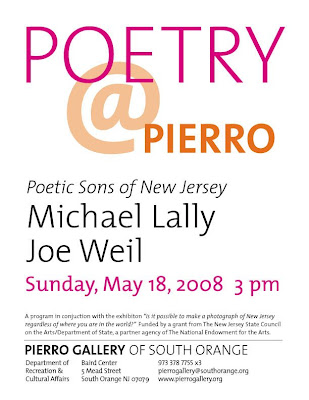 Yesterday’s reading with Joe Weil was a gasser, as my friend Selby (and Louis Armstrong and a lot of other older hep cats) used to say. Especially for me, since it was held in a gallery in the community center in my old hometown, in a renovated room with white gallery walls on which hung digitized photographs taken by artists around the world trying to capture in one shot their idea of “New Jersey.”

This same room when I was a kid was old and funky with fading institutional-color painted walls (the color of which was always difficult to discern, was it some shade of brown, or orange or yellow or green?) with a couple of pool tables in it and a bunch of surly teenage boys.

Joe and I have a bunch of things in common, starting with our Irish Catholic ancestry and “neighborhood” sensibilities, as well as a generally straight ahead approach to “the problem of the poem,” as they (or someone anyway) used to say.

Given all that and more, we decided to “trade tens” (each reading for ten minutes at a time, then trading back and forth for three ten minute sessions each). I had some poems I meant to read, but shifted that plan to response mode after Joe started us off and really cooked.

He’s a great reader, an impressive presence, a unique personality, and a really fine poet, so the combination had the audience hanging on his every word, applauding after his every poem, and mixing outbursts of raucous laughter with the solemn soaking in of his more poignant lines (some of which I meant to quote here, but after exchanging books, I somehow left his behind and now have to either find it or get hold of another, and when I do I’ll write about it on this blog again).

As in jazz when musicians “trade fours” (i.e. four bars of music, each musician improvising on the chord changes in those four bars of the tune they’re playing) it raises your game because you don’t have a long time (a whole chorus say) to show your stuff, so you have to play sounds that are grounded in what the tune is about and at the same time display the originality of not only your improvised melody over the changes, but of what you can do with the playing, i.e. mess with the tone, texture, emotional feel, intellectual commentary, etc.

It was a terrific exchange, for my taste, and we were asked for an encore, for which Joe did what I’d heard he often does at readings, he sang a song. This time one his departed mother used to get a kick out of when he sang it as a boy, an Irish tune about, yes, drinking, but also so much more. It was poignant and funny at the same time, much like Joe’s poetry.

Afterwards, we both sold a lot of books, which means people liked our reading. Some even said it was “the best reading” they’d ever attended (someone was supposed to record it, but that didn’t happen, which is fine, because I’ve learned no recording, whether audio or visual, can ever capture the excitement of live events, or at least of poetry readings, in my experience anyway, it’s almost always a case of “you had to be there.”

And afterwards, at a pizza tavern in nearby town (I wished I had invited everyone, but it was a last minute decision with only a few of us still hanging around) the crac (as the Irish call good conversation and hanging-out times) was great as well.

Hopefully, we’ll do it again somewhere sometime, and when we do, I’ll let you know about it.
Posted by Lally at 9:06 AM

Not entirely true, brother. You, as my oldest living "close friend," and I, someone who's "heard your song" since the day I met you, I was "there."

I remember being one of those kids(not necessarily surly) in 1956 or 1957 when Elvis Presley came on the TV. My "Our Lady of Sorrows School" chums were quite enthused about his talent. I couldn't see it and said he would never make it. My talent picking has not improved with the years.