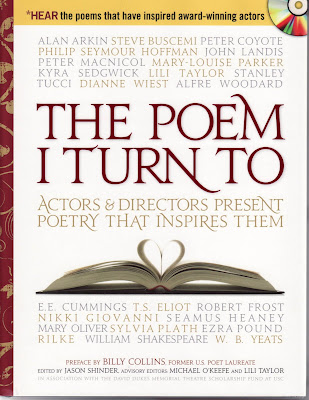 THE POEM I TURN TO (Source Books Media Fusion), edited by Jason Shinder (with help from Michael O’Keefe and Lili Taylor) is an original idea: a poetry anthology in which the poems are selected by (mostly) movie actors and directors as the poems they “turn to” when looking for the kinds of solace, inspiration and insight that poetry can sometimes offer.

Each contributor was asked to choose two poems, one by a dead poet and one by a living one, and then write a short statement explaining why they chose the poems they did. Not everyone who contributed did all that, e.g. Jane Fonda chose two poems by Rilke and offered no explanation, while Paul Simon chose only one poem, by Stanley Kunitz, and also offered no explanation.

But most followed the format, especially “movie” people you probably never heard of. (Like me, invited to contribute, I chose a poem by WC Williams and one by Terence Winch.)

It’s actually a pretty interesting anthology, the selections not necessarily what you might expect (a lot of Rilke, T. S. Eliot and Shakespeare, but also Lorca, Blaise Cendrars and Paul Celan).

There are unexpected choices (Daryl Hannah’s Cendrars, Mary-Louise Parker’s Kenneth Koch) and surprising choosers (me among them), plus a CD of some contributors reading the poetry they chose.

There’s some obvious movie folks missing, people I know have a deep interest in poetry, like Karen Allen, Alec Baldwin, Sharon Stone, Sean Penn, et. al. But it can’t be easy getting to some of these people nor for them to find time to respond etc.

The late Jason Shinder put this anthology together—a project he devoted a lot of time and energy to despite being gravely ill—as another expression of his love of poetry and desire to share that love with as many people as possible.

I’m grateful to him for that effort, and that he got to see the result before he died, and that he included me in. 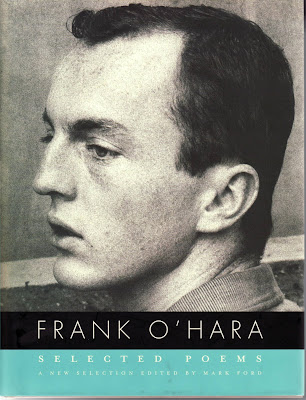 What makes Ford’s selection different from Donald Allen’s THE SELECTED POEMS OF FRANK O’HARA (which came out in 1974) is not only that it is more selective, with fewer poems (and one of O’Hara’s plays), but that it makes that selection from more sources, since more poems were discovered after Allen’s SELECTED came out.

For me, O’Hara is like certain creators who never made anything I can’t find reasons to dig. Minor works? For my taste what critics and academics find “minor” I often find emblematic or unique or another “major” work by a master of his or her art.

(A short list of creators whose every work I find worth knowing would include Eva Hesse, the Beatles, and John Lennon without them, Van Morrison, William Carlos Williams, Vanessa Redgrave, Martha Gellhorn, Humphrey Bogart, de Kooning, Rilke, Cendrars, Kurasawa, etc.)

But, if you don’t know O’Hara’s work, or love it and want to turn someone else on to it, this is a fine introduction. It’s also the perfect gift even for old time O’Hara fans like me (which is how I got it, for my recent birthday from poet and friend Terence Winch), not only because it's a beatifully made book, but because it is a new look at O'Hara's work in a new format with new juxtapositions and a new order making it come alive in new ways, the way all classic work always does when re-presented.

For a look at O'Hara reading one of his own poems check this link (thanks to Kevin McCollister, another friend and favorite poet/photographer) 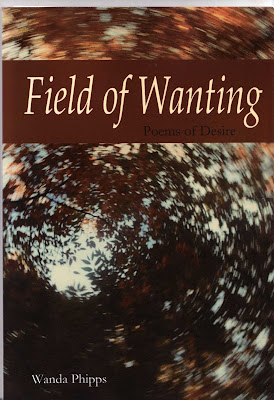 FIELD OF WANTING (BlazeVOX [books]) is a collection of new poems by Wanda Phipps, a poet whose work always reminds me that what the media often reports on as some kind of new revelatory phenomenon, i.e. blogs where people reveal deep secrets of their personal lives and psyches, or “creative fiction” “memoirs” that shock with their candidness, has been going on in poetry seemingly forever, only the revelations are usually deeper and more originally expressed.

As I say in the blurb I wrote for the back of Phipps new book, “…her honesty is refreshing and uniquely personal. It is simply poetry you will find nowhere else.”

I end the blurb by saying her poetry “will seduce you with its clarity and originality. More a voice singing in the rain than crying in the wilderness, even if the rain is sometimes blood red.” ‘Nuff said.
Posted by Lally at 3:02 PM

Lal--Many thanks for posting the link to the video of Frank O'Hara reading "Having a coke with you." It's great fun, and you can imagine what it must have been like to go to the Frick with him or to go Blue Ridering with him and Marini.
Bob Berner

Thanks so much Michael--I really appreciate the kind words about my work--in the middle of moving from Brooklyn to Harlem now--head in a million places now but seeing this really picked me up.

Hey! You're one of the contributors for The Poem I Turn To! I listened when you read Danse Russe on the CD and thought this poem was quite funny and thought-provoking.