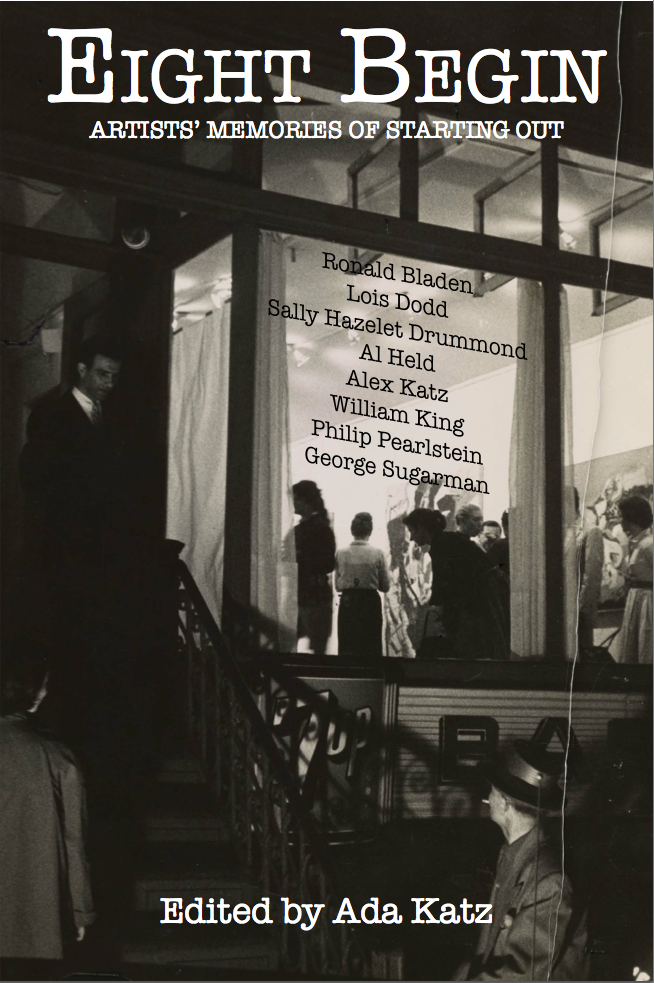 I went to a book signing at The Loretta Howard gallery on West 26th Street in Manhattan Saturday evening, partly to see old friends but mostly to buy the book: EIGHT BEGIN: ARTISTS' MEMORIES OF STARTING OUT, a small collection of interviews Ada Katz did with eight artists associated with the 10th Street gallery scene back in the 1950s.

I've always admired Ada, as well as liked her, and truth be told had a crush on her, not just because she's lovely but because she's so smart and insightful. I learned early on that she had a Masters in biology from NYU and had worked as a biologist, and later I performed in some of the theater stagings she produced of poetry, like John Ashbery's, for her Eye And Ear Theater presentations.

Now EIGHT BEGIN confirms she's an artist in her own right because this, what amounts to a group memoir, is a unique and important book to my mind. I wish there were more like it. Ada did the interviews in the early 1970s, wanting to find out where these eight artists came from, how they grew up to become artists and what it was like to end up in Manhattan in the 1950s and discover the other artists who took part in the artist-run galleries that became known as the 10th Street Galleries, or simply 10th Street.

She asked the kind of questions that lead to revelations rarely shared because most interviewers ask standardized questions that lead to standardized answers. But Ada got at the essence of who each of these artists truly are, and were, and then she removed herself from the equation, leaving only their replies as one long monologue that is so compelling, at least to me, I felt when I was done that I'd been there and known them since childhood.

I met Ada for the first time around the time these interviews were done, and my first and lasting impression was of a great presence who observed, understood, contributed just enough to make you want more but remained a mystery in many ways herself. Even though I'm certain she would dismiss my making this response to EIGHT BEGIN so much about her, I couldn't and can't help responding to this book as if she had written it, which in a sense she did.

She was smart and thoughtful enough to have conducted these interviews back then, and with enough foresight to realize this was something that should be done for posterity, and here we now are the beneficiaries of that intelligence and thoughtfulness and foresight. I love the way each artist comes to life in these pages and how the process of their creativity is articulated and their individuality expressed. And by removing herself from the process, at least in the form of her questions, it leaves the impression that these artists just decided to tell their own stories as if talking to a friend at a party interested in their personal histories.

Among them are artists I know personally, like Ada's husband Alex, and others I know only incidentally, and a few I don't know at all, or my post-op brain doesn't remember. Among the latter the ones whose work impressed me in ways I hadn't foreseen, and whose memories resonated deeply and unexpectedly, since they don't seem on the surface to be extremely exceptional, the memories I mean, were Lois Dodd and Sally Hazelet Drummond. But being women artists at that time they, of course, were exceptional whether they thought so or not. The humility of the latter and the matter-of-fact honesty and plain-spokeness of the former, and the creative integrity of both, feels enlightening, as if I were having epiphanies reading the stories of their early years.

The six male artists' memories and explanations of how they came to their art were equally engaging and rewarding—Ronald Bladen, Al Held, Alex Katz, William King, Phillip Pearlstein and George Sugarman—but for the most part I knew their work, and in some cases their personalities, so I didn't expect to be surprised to encounter them on the page, yet in their cases as well there were delightfully unexpected discoveries bringing them to life in ways even being in their presence rarely has. Some deeper essence of their personalities and creative lives is expressed in these pages thanks to Ada's probing questions and ability to get them to open up disarmingly.

The book is slim, the artists' memoirs brief, and yet the entire enterprise was as fulfilling and satisfying as any great creative work can be. This goes on the shelf as a permanent member of my favorite books section.
Posted by Lally at 11:54 PM

I hope Lois Dodd and Sally Hazelet Drummond were able to avoid the mistake (not quite the right word) that a fellow artist of the same time frame, Joan Mitchell, made. I'm reading Mitchell's biography ("Lady Painter")and her non-stop drinking and smoking which to some extent was tough-guy posturing, took quite a psychic and physical toll.

And I say this as someone who went down that same road for more than a few years.