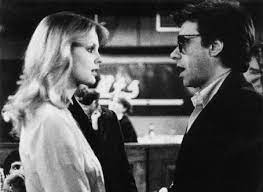 I only encountered the director/actor/writer Peter Bogdanovich in person once. I was renting and living in, with my then two kids, an illegal-for-living-in loft on the corner of Duane and Greenwich in a rundown sparsely populated neighborhood soon to become "Tribeca" and woke up one morning to a movie being shot outside my window, a scene for They All Laughed starring his new love Dorothy Stratton.

When I found out it was him shooting the film, I rushed down to the street hoping for the chance to tell him how much I dug Daisy Miller and At Long Last Love, the movies that critics and audiences rejected but I saw value in. I don't remember getting to actually talk to him but Dorothy Stratton sitting in one of those movie-director chairs smiled at me.

He was not just a talented artist in the filmmaking business, he was also one of the most interesting directors, actors, writers ever, who made something unique out of his rocky careers. Rest In Pictures Peter.