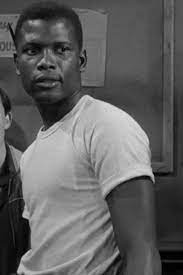 Blackboard Jungle came out in 1955 when I had just become a teenager and half the boys in my 8th grade class at Our Lady Of Sorrows grammar school came to school the day after it opened calling each other "daddy-o" and wanting too be in a gang. The one I became a part of for a while was the Spartans, all Irish-Americans, like me.

But the actor who made the deepest impression on me and played the coolest character in the film was Sidney Poitier, who I only realized years later I fell in love with watching him in that movie. And over and over again in every other movie I ever saw him in. No matter how badly written or executed a film was, Poitier always elevated it just by his presence alone.

I never got to meet him but he still became a part of my inner life from Blackboard Jungle on, and will remain so. R.I.P.