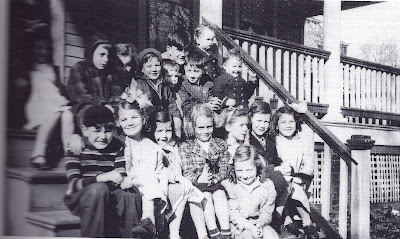 I spent yesterday afternoon in a playing field behind the local high school with my youngest son who wanted me to watch his friend play in a lacrosse game.

It was such a wildly unique experience on so many levels, touching so many aspects of my life, as so often happens, that it seemed like the very purpose of life itself.

First of all I grew up playing in this same field. The backyard of my boyhood home ends where part of the field begins. Back then there was a a row of bushes that separated them, through which the kids from the neighborhood had made an entryway so they could cut through my yard to the field and the high school beyond.

But you could see all that back then looking in either direction, my home from the field the field and high school from my home. Now you can't see anything because of these enormous trees that have grown up since to tower over the little houses that line my street.

Though at the bottom of the little hill I grew up on the field reaches all the way to the street on the other side of which I could see the house my Irish immigrant grandparents lived in with one of my father's brothers and his wife and daughters. The steps seemed so huge when I was a kid it felt like they could hold the entire neighborhood. Now they seemed so small. Maybe that's because they're new and rebuilt, the old porch and stairs falling down when I first moved back here before the real estate boom and bust.

My grandparent's house has recently been bought and sold and spruced up so it looks much better than when I was a kid but so much less authentic. As do all the houses on my street. Either they've had siding put up, or the stoops and porches have been enclosed to create another room or a vestibule, or they've had tiny driveways created where there's enough room. Changes, not for the better to my mind and memories.

The sidewalk itself is different. When I was a boy it was made of bluish-grey slate squares quarried locally and set in a row with a little patch of earth between. Slate that would flake and we'd use the smaller broken off pieces to write with or make sparks. Now they're colorless and characterless cement squares like everywhere else.

There's a "Bush-Cheney '04" sign on the glass of one enclosed front porch on the block that looks like it's almost etched in, permanent in some way. Where once Irish and Italian immigrants mostly lived, there are now immigrants from East Asia and the Caribbean and Africa, with a few Irish and Italians and African-Americans still left, including a cousin's ex-wife who lives in my old home with her police officer son, last I knew.

There was an old tennis court at the bottom of the street in the field when I was a boy, a sport we felt was for rich kids, the same way we felt about lacrosse, those of us who even knew what that was. The old court was grass, enclosed in a high wire fence made of those woven diamond shaped patterns of thick metal stretched onto metal poles stuck deep into the ground and topped with a little pyramidal shaped metal crown, the kind of ornamentation most things seemed to have when I was a boy.

There's only one side of the tennis court fence left, the court itself long gone, incorporated into the field with an asphalt path meandering around the perimeter. I went over to take a closer look at the fence, which it took me a while to even discern from where the lacrosse game was going on because the fence is embedded in a row of more enormous trees.

But I also had visions of old movies when I was a boy that had scenes of servicemen wandering around on old overgrown airfields or among no longer needed planes or tanks and realized I was feeling now the way those movies made me feel then even though I was merely a boy with very few memories of how much time changes things, but many memories of movies.

All this while the sun was shining so bright I borrowed a little hooded sweater from my son's friend's mom's daughter to cover my bald spot, and every now and then the wind would whip up so fiercely it looked like the enormous trees on my street's side of the playing field would bend over and topple. And the dust in parts of the field being used for the lacrosse game would nearly blind us.

There was much more to the afternoon. The fact that my son's friend's team consisted of a mixed race bunch of kids that not only would never have been playing lacrosse when I was their age but wouldn't have even lived in the town I live in that's now known for it's racial mix and abundance of same gender couples with kids.

I looked at the high school where I played stick ball against the wall, a wall buried behind the extensions built onto the school since I was a kid, and the A&P that took over a row of tiny Mediterranean style bungalows that were there when I was little, and the place where the bowling alley/diner was that seemed so exotic and cool when I was a kid with the teenagers in gang jackets playing the juke box, it's now covered in the ugliest cement painted battleship gray and advertising "Vinnie's Nails" where the juke box joint was, the alleys having long been converted into apartments.

I could go on, as I'm sure if you've read this far you know quite well, but the mix of old and new, the missing of some of what has passed (a lot of it is well gone) made me think of my mother and running to that A&P to pick up some ingredients for supper and the men from the hobo camp that's no longer by the tracks behind the A&P who used to come to our home for a handout because they knew what a soft touch she was, and missed her in a way I hadn't for decades.

Then today I read my good friend poet Terene Winch's post on THE BEST AMERICAN POETRY BLOG and thought how lucky I am to have such great memories and to have had the chance to come back after over forty years to get close again to the ghosts of my boyhood and put them to rest. Perhaps.

[PS: The photo above may not be on my grandparent's steps and if so it's reversed (the steps would be on the right), but I'm pretty sure that's me in the upper right, the jowly toddler near my almost teenage brother Robert, who would grow up to be a Teamster and a cop while still at home when I was a boy, and two of my sisters are in the crowd, as well as some cousins. I'd guess my two oldest brothers were off in the service for WWII when this was taken.]
Posted by Lally at 2:39 PM

Dear M: I'm sorry to hear about those trees. Time to whack them with a good chain saw when no one's looking? (Thanks for the plug.)
TPW

No, I dig them, like living history with a piece of my past so embedded in them I suspect they'll be around for another forty or fifty years.

Michael, won't it get lonely when you put the ghosts to rest? Since I'm inept at this cyber stuff, I'm going to email you side by side pix of me in the same spot by the Museum of Natural history in 1959 and 2008 ;)

Dear Lal--Thanks for the link to Winch's blog. My father's mother used to say, "There's a peck of dirt in every man's life." Which may explain how it is we are only dust in the wind.
Bob B.

We should put a collection together of our mother's sayings.

I'd buy one for me and one for each of my friends!

Sadly the only saying I'm coming up w/right now is "I'll give you something to cry about!". I don't think that would sell much. Love the link to Terry's poem! And love the last two lines especially.

I can see from the crowd of kids on the steps in the photo why you might have imagined as a kid that your grandparents' steps could seat the whole neighborhood.

This is a beautiful post, Michael, one of those lovely posts that I so much enjoy from you, so honest and authentic, so full of gorgeous detail.

Thank you Elisabeth. One of the challenges in doing a blog that covers a wide array of interests is folks e mailing me to say they prefer when I write only about politics or poetry, or movies, or make lists, or etc. The central problem of my life or gemini nature or perhaps it's ADD but wherever it stems from, I like to jump around and hopefully keep it interesting and mixed enough to have people continue to drop in to see what it is I'm going on about now!

Hi. I thoroughly enjoyed reading this and re-experiencing these memories. I grew up across the street from you! The trees, the sidewalk, the initial funk of the area behind the A&P. Thanks for the memories. I lived on this block from 1962 to 1976. Mom just moved last year.