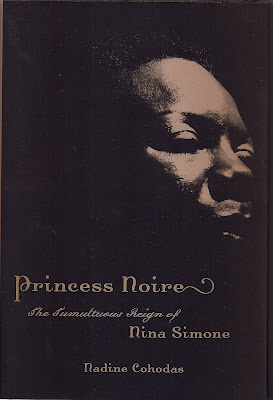 The book is subtitled "The Tumultuous Reign of Nina Simone"—which tells you what its emphasis is.

I fell in love with Simone's music in my teens as she was just beginning her ascent into the realm of unique music creators. I was beginning to play a little professionally and considered myself a "jazz musician" at the time (the late 1950s and early '60s).

Other—especially older—musicians would argue that her technique was sloppy and inconsistent, basically throw in some classical style keyboard length runs, mix with some blues and jazz riffs and trills, build to a crescendo, and sing almost monotone but emotionally fraught.

But I dug the ways she mixed things up, resisted the simpler classifications. Plus I identified a lot with her technical limitations (her critics, including some quoted in this book gave her credit for classical training but saw her skills in that genre as not of the highest order, and saw her blues cred diluted by her classical input and jazz cred compromised by her folk and classical influences, etc.).

She saw herself initially as a classical performer limited by racism from achieving the heights of classical stardom she dreamed of as a child in the segregated South being taught and promoted by a kindly older "white" classical piano teacher.

Mostly I found Simone's unique personality as expressed in her music beguiling and seductive in those early days. And then things changed. Not just in terms of "the sixties" and all the political and social turmoil, as well as the elevation of first folk and then rock'n'roll to more formidable art forms and avenues for political expression etc., but more importantly, for Simone, the great changes in "race relations" and the impact of the Civil Rights movement in its "Black Power" phase.

She latched onto that momentum and contributed to it as, for example, with her composition "Mississippi Goddamn" which became one of her most widely recognized achievements. But she also expanded her diva-ness to incorporate her rage over real and imagined racial and other slights.

As Nadine Cohoda, her biographer for PRINCESS NOIRE makes clear, there was more going on than just political and artistic changes. Simone seems to have had some serious mental problems as well. The author speculates that it was early signs of bi-polar disease that caused many of the incidents that turned not just managers and agents and bookers and night club proprietors and sometimes even audiences off, as she would show up hours late for gigs or walk off the stage if someone in the audience did something she didn't like or the audience didn't respond the way she wanted them to etc.

But a lot of later incidents sound as much the result of a drinking problem, to me, as anything else (though that may just have been Simone self-medicating). Whatever you attribute it to, she definitely became difficult for almost everyone who encountered her. I didn't know much about these things as I just lost interest in her musically in later years. What I heard just didn't, for me, hold the magic and mystery of her earlier work, but instead seemed pointedly self-aggrandizing in ways that simply turned me off.

But I never stopped loving her early recordings and listen to them still. So I read this new biography with great interest. It left me with some more knowledge of the details of some of her travails, but with not much more insight into them than I already possessed, and the writing is passable but not as exciting or attention grabbing as Simone's music.

If you love Nina's music and think of her fondly, it might be better to skip this bio and stay with your own impressions. But if you're interested in finding out more about her and have an interest in the cultural history of the 1950s and '60s, in particular, you'll find enough here to maintain your interest. I did. Just not enough to completely satisfy it .
Posted by Lally at 10:06 PM

Doesn't this say something, Michael about how the tragedy of a difficult life, especially mixed in with the injustices of racism and inequality can interfere with a wonderful talent.

I knew little about her, loved her music and now, despite her poor behavior, I feel sad for Nina Simone.

Yes Elisabeth, there's a lot of truth in that, though the book makes clear she actually was the one child in her family who got the best of everything that was available to them at the time. She was almost always treated like a "princess"—in terms of family and friends etc. Obviously she also witnessed some of the stupidity and negativity of enforced segregation etc. and I'd guess was traumatized to some extent by all that. But in the context of her times, she was more fortunate than a lot of folks, and her siblings, who didn't receive as much help or access etc. seemed perfectly well adjusted. So, there was something in her that obviously made her special in pretty much every way, "good" and "bad"...

thanks for reminding me brother. And thanks for that post.

Swell post, definitely a case of credit where due.

NS has meant a lot to me at at many times in many places over the years.

She often seems to speak for all of us. In a curious way. Just diverse souls whose intentions are good. What else can we ever say but...

Please Don't Let Me Be Misunderstood