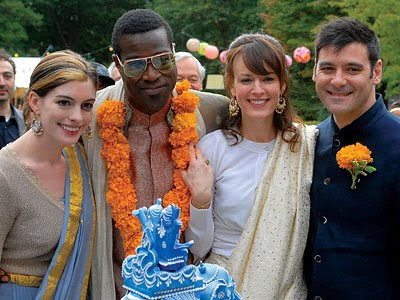 Finally watched this flick so many people I know dug. Tried to watch it before but couldn't get into it.

This time I was able to. The faux cinema-verite/HD-digital camera shaky disjointed movements and framing bugged me, especially coming from Jonathan Demme who's always so terrific at making me forget I'm watching technicians at work.

Yes it sort of matches the the recovering addict Kim's perspective and its impact on her family etc. But to me that's like distrusting your casting. Anne Hathaway, who was nominated for an Oscar for her role as Kim, is a fine enough actress to pull it off, though I thought she could have been directed to restrain herself in a few scenes that seemed based more on melodramatic effects than any reality I've seen or experienced. But she continually pulled it off anyway.

And Rosemarie DeWitt as her sister, Rachel, is a total discovery for me, even though I've admired her work before, but in this film she's a revelation. Whereas Bill Irwin as her father, uh, well, he had his moments but overall I thought he was miscast.

The real treasure and the reason I ended up finally digging the flick is Debra Winger kicking behind in her role as the mother of the bride and her difficult sister. Man was she great. Made me think she's like our Vanessa Redgrave, or could be, given the chance of more challenging roles as she ages.

Anyway, if you've never seen it, the jittery camera work and operatic overkill in some scenes might deter you, as it did me the first time, but if you persist, it's a pretty satisfying movie experience.
Posted by Lally at 10:22 PM

I totally dug it. Anne Hathaway has moved into the top 5 of my female movie actors. After you watch this movie and then go back and watch her in (the now cult favorite)"The Devil Wears Prada," you will realize that she has major range. In other words, she is not a lightweight. Oh, and did I mention it, she is gorgeous in the old movie star way.

First time I realized she was so talented was that teen flick with Julie Andrews where' she plays the unexpected princess (PRINCESS DIARIES?), her range in that was amazing as well, from Lucy pratfall stuff to emotional vulnerability and poignancy, etc. and all within a completely implausible story line.