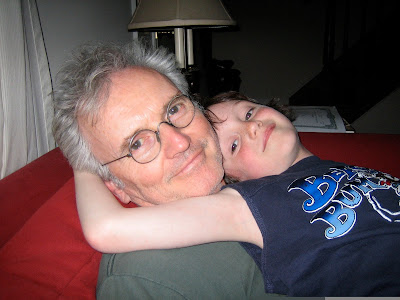 I'm up in the Berkshires for the weekend and went to a movie theater in Canan Connecticut tonight to see TOY STORY 3 with all my kids and grandkids.

The theater is a classic old-style one, converted to accommodate dinner. The set up for the downstairs theater where we saw the movie reminded me of night clubs in old Hollywood movies from the '30s and '40s. There are tiered levels with tables and theater style seats facing the screen, which is more like a stage with old style curtains and all.

The food is simple, pizza and hotdogs and quessidilas and wraps etc. Great place to watch a family-style movie with a family.

As with the first two in this series, I enjoyed TOY STORY 3. Enough adult gags to make me laugh out loud and sympathetic plotting to make me tear up.

But I noticed amid all the usual plot points for these kinds of adventures, that the boy—"Andy"—whose toys are what all the TOY STORY(s) are about, seems to be fatherless. It's the mother who gets emotional about her son going off to college. And it's the mother of the little girl, the other main child in the film, who gets the screen time. It's impossible to know if there's any fathers involved at all. (Was that the little girl's father doing yard work or a gardener?—impossible to know as he never says a word or does anything to interact with the other humans in this flick.)

I couldn't help but notice this since it's Father's Day and there I was with my sons and daughter and grandson and granddaughter, wondering where am I in this flick.

The movie was almost too dark at one point for my seven-year-old granddaughter to take, sitting on her mother's lap by then, saying she wanted to leave, but eventually making it through to the sweet resolution that dried her tears and made her smile. That and her uncle, my twelve-year-old son, telling her, "It's a movie, it has to have a happy ending or kids wouldn't want to see it."

The tears I mention above that filled my eyes, came from emotions called up in my remembering when my older son and daughter left home for college after I had been raising them pretty much on my own for most of their lives. It was a great wrenching in my heart to see them go, no matter how proud I was of them.

And now I face pretty much on a daily basis the knowledge that my youngest will not so many years from now be going out on his own and, after facing several life threatening conditions, that even before he does I may be gone. (I don't mean to be morbid or negative, I pray for and project a long life for myself for my little guy's sake, but after a few brushes with death you have to be aware of your mortality.)

As I've said many times since my brain surgery, I lost my compulsion to make lists. But I think I'm going to force myself to try and come up with some movies that address the kinds of powerful emotions fathers feel when they're children grow up and leave, and not "father-of-the-bride" dimwitted male caricatures, but the kinds of things I've been through and am still going through regularly that I'm sure many other fathers understand from their own experience.

[PS: The photo above of my youngest and me was taken by my good friend Jamie Rose on Father's Day 2005—when he was seven.]
Posted by Lally at 10:31 PM

Ah, I remember taking this picture. Such a wonderful afternoon. One of my favorite pics of you two.

And interesting observation about the absense of Dad's in those movies. Makes me want to make a dad movie list. First comes To Kill a Mockingbird.

It's sad that movies tend to underestimate the significance of fathers, Michael. This by the way is a lovely shot of you and your son. May you live long enough to see him into adulthood and beyond.

I watched the movie 'Up' this weekend in which father's get a mixed reception.

There's the hero old man adoptive type father who's slow to respond to the young boy scout but once he does he's wonderful, and the absent father who's never there for his son. Have you seen it? It's worth watching.

Great start Jamie. And yes Elisabeth, I did see UP and enjoyed it a lot. The sequel chronicling the old man's relationship with his wife from childhood to her death is one of the best in movie history for my taste.

Dang Lal! The old brain surgery does get to you once in a while. To wit: "sequel" instead of "sequence." For about a half a minute I was saying to myself, "I didn't know they had already done a sequel to UP; how did I miss that?" Then I got it, and yes, you are right, that sequence is a small masterpiece of film-making, animated or otherwise.

Dear Lal--Your 12 year-old son is way ahead of the game if he already understands why some movies have to have happy endings.
As to father-son movies, may I offer "The Boy With Green Hair"? It's actually a grandfather-grandson movie, but it's still a story of a young one learning from an elder.
Pax Tecum,
Bob B.

Thanks Tom (and that's after proofreading and correcting many many post-brain op typos and mistaken choices, the funny thing being my mind says the correct word but my fingers type another often!), and good one Bob.

Well, if we go w/grandfather grandson, The Princess Bride is top of my list.

Thanks Robert, coming from you that's saying something.
And Cait, that's a good one but I think grandfathers definitely come off better than fathers in more flicks. In fact, a father expressing real emotion over their kids leaving etc. is pretty rare in movies.