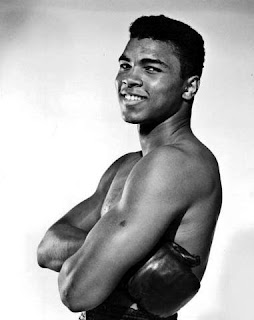 When I was a teenager hanging around Greenwich Village in the late 1950s to February '62 when I joined the service, I stayed at the apartment on W. 3rd St. near MacDougal with three older black dudes one of whom had been the heavyweight champion of the Army several years earlier, DeWitt Jennings.

I saw him take on two racist sailors (who, yes, were from the South and were on 3rd Street because at the time it was crowded with strip joints) at the same time and kick their butts, but that's another story. This one is about how DeWitt told me to bet on Cassius Clay against Sonny Liston and all the oddsmakers because he'd seen him fight as an amateur and said he was gonna be one of the all time great boxers. So I did and made a lot of money for a teenager.

Then in the late 1960s when I was at the University of Iowa my then wife Lee and me were visiting the Catholic chaplain when he said he had a surprise treat and the greatest walked in (don't remember if he was still Cassius Clay or had gone to being Muhammed Ali at that point). Turned out the chaplain and Ali were friends from a previous time and place. Ali was gracious and fun. He seemed a lot taller than me and I was a foot taller than Lee so it was a funny scene. An incredibly good natured guy who obviously respected his priest friend who would go on to baptize our oldest, born in Iowa City, Caitlin.

A few years later, at the height of the movement against the Viet Nam War I was in Philadelphia at a convention that truthfully I no longer remember who it was held by, SDS? Or The Peace and Freedom Party or some more radical group? At any rate Ali showed up unexpected exactly where I was and once again shook my hand with what seemed like his enormous one and wrapped an arm around my shoulder and had me grinning from ear to ear just to be in his presence. And once again he was respectful and good natured and clearheaded about the goals we were all fighting for.

I loved watching him box but don't watch boxing anymore, one of the two sports I grew up watching in my clan, the other being the ponies (aka thoroughbred horse racing) and which I loved, because of what happened to him from all those punches. He was still capable of much love and the occasional zinger the last time I saw him on TV, and he remains the most world famous man of my lifetime, maybe of all time. And most who know him, or of him, love him.

You met the greatest twice??? And he had his arm around you? WOW. Watched a lot of fights with my father as a kid and always loved Muhammad Ali. An IPhone would have been handy back in the day.... a cool photo- Lally & Ali.

Yeah I hear ya. I tried photography once during the whole 'sixties demonstration era I was so much a part of, but it seemed to only get in my way. I decided after that I'd just be satisfied with the images in my mind. Though ala the last post I'm having fun finding old photos of other greats I've been lucky to know.

I was also in Iowa City at that time (as you know) and also saw Ali at the Iowa Student Union. Ali was amazing! I went to Rock Island, IL w/ two friends to see a closed circuit fight of Ali and Cleveland Williams. My friends and I were the only members of the audience to root for Ali, and that got a little scary.

Speaking of sports figures, Lance Armstrong opened up to Oprah about screwing up. But far bigger screwup than the doping itself was lying to the legions of people/fans who looked to him for inspiration and higher-being. He now has the opportunity to become a better person, in service to truly helping others. I pray he learns from his screwup and takes the high road from here on.

Ali visited Fordham University, where I was a grad student, in the late '60s, during his exile from boxing. I remember standing with a handful of students as Ali, resplendent in a blue suit, joshed and joked with us, at one point picking a kid up off his feet with one arm. His charisma is hard to miss, or match. And let's not forget he's the great-grandson of an immigrant from county Clare.

And just visited there, Joe Frango posted this link when I shared this post on Faceook:

Don't know why that didn't work. But you can look up Ali's recent Ireland visit on Huffington Post.

I meant to say that my friends and I were the only white guys in the audience cheering for Ali. Years later, a guy who lived in my dorm when I was at Truman State, Ken Norton, broke Ali's jaw in the ring.

I am close friends with Ali's first wife, Khalilah Ali. The first time we met at lunch last year, she put me on the phone with The Champ, she introduced me to him as "my photographer." I've been on the phone with him a couple of times since then and, though he's now hard to understand, I can feel the sharpness, clarity and power of his consciousness. Khalilah too is an amazing force of nature, spirit and a treasure chest of history.

That's so cool Robert. Do you have a photo up on yr site or somewhere else of Khalilah?

I'll email you a couple of pics, which you are welcome to post. Thanks Michael.