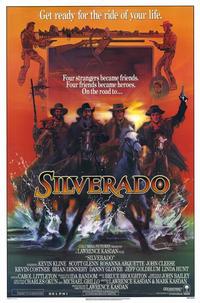 Another late night at the home movies. Hadn't seen this since it came out, and whether due to age or the brain op I couldn't remember much about it at all. But pretty soon into it, I did remember being really impressed with the new young actor whose name I wanted to get in the credits: Kevin Costner.

He was so much fun to watch, and when you combine him with Kevin Kline, who is always fun to watch, but was especially back then in his first and maybe only Western, damn what a delight. Talk about a better way to make an action flick. It moved right along and was shot the old way, with real life colors and all, and the cast was incredible. Not just Costner and Kline, but Danny Glover, Scott Glen, Roseanne Arquette, Brian Dennehy, Jeff Goldblum, and Linda Hunt, who almost stole the movie despite the stellar cast, as she almost always did back then.

And despite lots of mayhem and murder, the violence was relatively realistic but not belabored, or gratuitous or extreme or drawn out, or anything other than a good shoot-em-up. I wish they'd made a sequel.
Posted by Lally at 12:09 AM

Always been one of my favorite movies. So underrated, and such a blast to just lay back and dig with no apologies. And yes, Linda Hunt is great in her role, topped only by her amazing performance as Billy Kwan in "The Year of Living Dangerously."