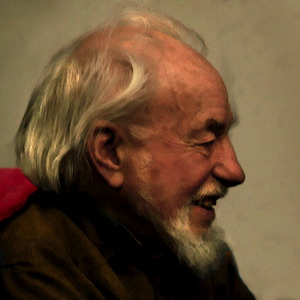 Harvey Shapiro was a poet who worked most of his life for The New York Times.  [Here's The Times obit]  I first met him in 1972 when I won the New York 92nd Street Y Poetry Center's "Discovery Award." He was the judge that chose a series of poems I'd written called "The South Orange Sonnets" for the award. It was the first time I received any kind of official recognition for my work, other than publication, so it didn't just make me feel happy and grateful, it made me feel validated and hopeful. When we met before the ceremony and reading, I immediately liked him. He was smart but unpretentious, humbly realistic. A really really nice man to be around.

When I moved back to New York from DC a few years later, I used to drop in and see him at his office at The Times, where for several years he was the Sunday Book Review editor. Once I was complaining that none of my books ever got reviewed there, and he explained that he had solicited reviews but they were so negative he didn't want me to feel bad so didn't publish them. I assured him I'd rather have a negative review than none at all, so then he published a negative review of a poetry anthology I edited called NONE OF THE ABOVE in which many of the poets I selected were slammed. Then I wished I hadn't told him that. I didn't mind a reviewer criticizing me negatively, but I did mind them criticizing others whose work I not only loved but selected for notice.

When I moved to L.A. and was back in Manhattan for a visit, I'd sometimes stay at The Algonquin, yes for its famous literary connection(s), and Harvey and I would have lunch and talk. He was always interested in what I was up to, not just with my poetry and other writing, but my life in general. Even though he wasn't much older than my oldest brother, who was sixteen when I was born, Harvey was like an old soul and had the gentle presence of a sweet grandparent in many ways.

I feel really grateful that I got to see him not that long ago, last year if I remember correctly, at the Hanging Loose Press anniversary party in Brooklyn, and once again got to tell him how grateful I had been, and still was, for his recognizing my early work with that "Discovery Award" and for being such a supportive and good person (he had no qualms disagreeing with me or criticizing some of the directions my work took in later years, but was always gentle and loving about it). He was walking very slowly, with help from a young poet, but his smile and gentle manner was the same, as was his intellect.

Harvey will be greatly missed by many of us, I'm sure more than he could even have imagined.

[PS: Here's a good example of his stripped down style:

After my death, my desk,
which is now so cluttered,
will be bare wood, simple and shining,
as I wanted it to be in my life,
as I wanted my life to be.


See how he not only uses so few words, but so few sounds even, "death" and "desk" so close etc. and yet manages to say a lot, and a profound lot at that.]

A wonderful poet & human being. It's good that he had such a long & productive life.

Thank you for your loving, erudite,
personal & compassionate eulogy
on Harvey Shapiro.

Thanks Harry, and tp, may we all be so lucky.

A very nice remembrance. It sounds as if he was a wonderful human being.