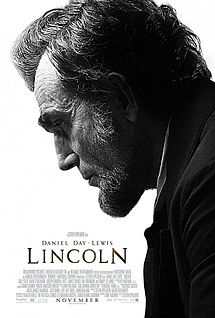 Got to watch LINCOLN tonight on one of the award season DVDs I've been getting, and with my fifteen-year-old again. What an extraordinary performance from Daniel Day Lewis. I can see why he's the favorite for Best Actor Oscar. And extraordinary is just the right word, because he captures that aspect of Lincoln that made him the exemplar of the ordinary man and yet with that something extra that made him so special a representative what is best about the ordinary.

The make up was so good, director Spielberg couldn't help lingering on shots, especially close up profiles, that accented the amazing resemblance to photographs of Lincoln as well as famous portraits, including the one on the penny. And as most of us know by now, Day Lewis did extraordinary research to place the voice and accent where contemporaries described it was and to get the walk and the common touch and the seducing and engaging and teaching by joke and story (so similar to, and yet so much more ordinary than, the Jesus of the Gospels).

And all the praise for Sally Fields is well earned, as it is for Tommy Lee Jones. There are Spielberg moments that are close to Disneyized, like the opening scene with soldiers of both races reciting the Gettysburg Address, and some political correctness in the bold ex-slave soldier's almost demands on the president to take actions the soldier thinks the president should and we know will happen after much struggle and activism.

But in the end, Spielberg's mastery of moviemaking makes what is basically a history lesson, and really only a brief glimpse into the complicated life and mind of the man many of us consider our greatest president, not just palatable but extremely engaging and even entertaining. My son stuck with it and dug it, as did I. And I was also once again moved at the miracle of great, or even just very good, movie making, as well as by what is definitely a great performance from one of our alltime greatest movie actors, Daniel Day Lewis.

To my mind Lewis may even be the only movie actor who can challenge Brando as the greatest ever. And I've felt that way ever since seeing Lewis in MY LEFT FOOT. And to my great fortune I got to see him live only days before he won an Oscar for that early performance. It was at a private Hollywood party where I got the chance to tell the then almost entirely unknown young actor how great I thought his performance in MY LEFT FOOT was. His reaction was humble and gracious and sincere. Kind of like a young Lincoln.
Posted by Lally at 11:11 PM

This film amazed me from start to finished. I thought that Daniel Day Lewis actually went beyond acting, and channeled Lincoln. I have never seen anything like it. Wait until you see it on a big screen at a theater...

I hear ya Robert. Daniel Day Lewis became Lincoln so completely that when he tells that story about Ethan Allen and the Brits and breaks into an upper class Brit accent for a minute to embellish the story, it never occurred to me that I wasn't watching the man, Lincoln, but actually an upper class Brit actor!

Braved the Arctic blast to see Lincoln tonight and it was well worth it. All you described here and more. Daniel Day Lincoln- I mean Lewis (I think) is a master at his craft. Loved the entire movie and hope more kids will watch it with their parents- taking in all the courageous history & heart breaking life lessons too .