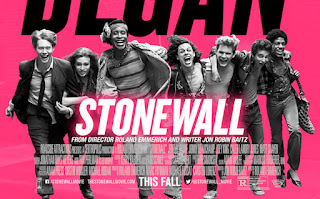 I didn't realize there was a call by some groups to boycott the movie STONEWALL until after I saw it tonight, but I can see why. Full disclosure: the poster above imitates a famous photo of Gay Liberation marchers, the group that started after the Stonewall "riot" or rebellion, one of whom (of the original marchers) was the man who convinced me to support the movement and actually when the famous photo was taken I had "come out" (as a political statement and stance) despite my having always been attracted to women (though I did then experiment with my sexuality and gender identification briefly and write openly about it and march and demonstrate and lose my job and many friends and endlessly etc.)...

Anyway, my point is, I have a connection to the history of the fight for LGBTQ etc. liberation and this movie gets a lot of it wrong, but some of it not so wrong. The main problem is the terrible writing and directing. Roland Emmerich is known for directing big budget action flicks like INDEPENDENCE DAY or WHITE HOUSE DOWN and he directs STONEWALL as if it's a big phony simplified action flick instead of a historical document about real people with real emotions and real courage in the face of real problems.

Baitz has written a few good scenes, but only a few. The main structure is the oldest gimmick in movie making, tell the story of black people, or women, or any kind of so-called minorities, but make the main character a handsome white male who acts heroically. So Baitz and Emmerich make up a leading man role that could be from almost any movie in Hollywood history, or Broadway for that matter. Let's pick one, like say HAIR, where in the movie John Savage plays an extremely naive country bumpkin from the simple purity of Midwestern farmland etc. who arrives in the big city to be schooled by the ragtag hippies etc.

In STONEWALL that made up character ("Danny") is played by a British actor (of course, because these days almost all "American" characters are played by Brits or Aussies) Jeremy Irvine and the entire story relies on made up business about his Midwestern country past and family and on his arrival in New York his being schooled by a ragtag band of young homeless street hustlers, some in drag, which some in the Stonewall rebellion were, but who in the movie defer in most heroic acts to the make-believe straight-seeming hunky white boy hero etc. (This made up white Midwestern character in STONEWALL actually gets to be the one who starts the uprising and then the first to shout the slogan "Gay Power"!!!)

I almost moaned right from the beginning at the terrible set that looked nothing like Christopher Street in 1969 (someone wrote it looks more like Sesame Street than Christopher Street) and then almost got up and left when a homeless young street queen admires a hat in a store window and throws a brick through it and takes it and stands around modeling it as if it was routine to do shit like that and get away with it. Ack. But what kept me in my seat was the performance by Johnny Beauchamp as Ray.

Some who believe the character was based on an actual Ray (Castro) who was at the Stonewall uprising, others on gay liberation pioneer Sylvia Rivera, and many more in the gay community, have disparaged Beauchamp's performance, but I found it mostly riveting and believable from my experiences with several young men I knew at the time very much like Beauchamp's "Ray."

But like a lot who are criticizing the film (and there's a lot more to criticize but this is long enough already), I too was greatly disappointed that the director and writer didn't have the courage to let the true story tell itself, and let the true characters who were mostly nothing like the made up hero be the true heroes of the film. But having said that, I also must admit I cried a lot at the end of the film and would have been crying even more if I had been alone in my living room watching it.
Posted by Lally at 12:08 AM

Hi, Michael....thanks for posting this.....I have shared your review on my facebook page.....yours is the first review I have seen....and reflects some of the misgivings that have been making the rounds in the gay community prior to public release....as you know I'm out here in the boonies so may have to wait a while before I get to see it.....Michael Ferri

Yeah, I'll be curious to see what you think...reminded me of many in DC in our years there...