THE POPE BEFORE CONGRESS

So the Pope goes before Congress and talks about four "Americans" as examples of living up to what's best about the people of this country, and much to my delight he chooses heroes of mine, flawed or not: Lincoln, Martin Luther King Jr., Dorothy Day and Thomas Merton.

Man were some in the audience either confused or squirming over at least some of these examples. Lincoln was obviously flawed and didn't do everything perfectly, but who among us has? The man kept a sense of humor pretty well in the face of overwhelming challenges and never seemed to lose his common touch. And no matter the politics of it, he did end slavery.

King has been a hero of mine since his letter from that Birmingham jail, another imperfect human who aimed high and sometimes missed but like Lincoln gave us a vision to aspire toward. Both he and Lincoln were martyrs to the cause of liberty and freedom for those who had been deprived of it on one level or another until they came along.

Dorothy Day was the big surprise. When Francis mentioned her it brought tears to my eyes. One of my all-time favorite examples of activism based on love for all, she started the Catholic Workers movement in the early 20th Century, when connecting socialism and Catholicism seemed more possible until now. I posted this not too long ago (that's her later in life still walking the walk): 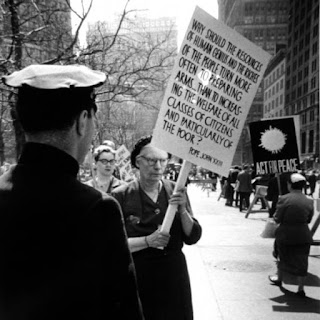 But she was also a denizen of Greenwich Village in the 1920s and '30s, the peak period of that enclave's bohemianism and she lived that bohemian life to a degree while still working to help the downtrodden get their rights and fair share and was doing so even when I first started hanging there in the mid 1950s and learned about her and came to respect and admire and wish to emulate her.

Thomas Merton I've known about since I was a boy, his best-selling autobiography, SEVEN STORY MOUNTAIN, was a staple in my home, whether everyone read it or not. He was a hero of my oldest brother Tommy's, who followed Merton's example and joined a religious group, though Tommy became a Franciscan friar, Father Campion, after WWII. He started that journey by using the G.I.Bill to go to Saint Bonaventure's University where Merton briefly taught just before the USA entered the war and where he began writing his autobiography.

My brother helped get me a scholarship to Saint Bonaventure's in 1960, where I was inspired by the manuscript of Merton's autobio displayed in a glass case in the library, so started writing my own (at 18!) which I wrote over the next several years and in 1968 began to distill into what became THE SOUTH ORANGE SONNETS. I got kicked out before my first year was over, thanks to my usual rebelliousness, but nonetheless was permanently impressed by Merton's writing and commitment to better understanding the human and spiritual connection all based on love.

The Pope didn't satisfy everyone, including me, with some of his remarks bringing the Republicans to their feet (talking about the sanctity of all life at every stage) and others bringing the Democrats to theirs (emphasizing that that means doing away with the death penalty). But he did challenge all of them to live up to the ideals the four he cited were trying to: liberty, equality, social justice and living a life based on spiritual principles embodied in the golden rule (which he quoted).

Hope some in Congress look into these four a little more deeply and use them to measure their own actions by.
Posted by Lally at 1:20 PM