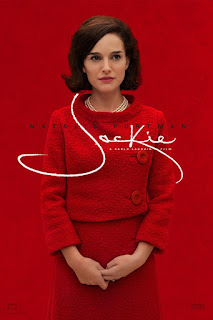 I went into JACKIE as someone who isn't crazy about Natalie Portman and was initially pleasantly surprised that her take on Jackie Kennedy seemed pretty accurate and well intentioned. But it wasn't long before the movie started to aggravate me. Especially the filmmakers presuming to know what was going on in private, either when Jackie was alone or in conversation with Bobby Kennedy (played by Peter Sassagaard, a terrible casting choice) or her priest (John Hurt, a better choice) and that presumption leading to Portman's too often overwrought interpretation of what drama is kicking the flick into BLACK SWAN MEETS JACKIE KENNEDY. Not recommending this one (though Billy Crudup and Greta Gerwig give perfectly underplayed performances worth watching as examples of realistic portrayals of real human beings).