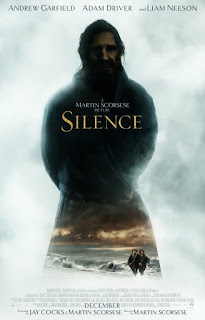 Martin Scorsese's SILENCE is not for everyone. The friend I saw it with felt it could have been a lot shorter. I thought it was pretty much miscast—Andrew Garfield, Adam Driver and Liam Neeson as Portuguese?! (Jesuit missionaries in 1600s Japan as the Japanese were closing down their efforts and demanding they give up their faith). And Garfield seemed in over his head or level of talent, at first, but eventually impressed me as did Scorsese's usual mastery (lacking only when someone else has the upper hand, i.e. Jack Nicholson in THE DEPARTED), making it a worthwhile trip to the theater for me.

If you found Scorsese's version of Edith Wharton's THE AGE OF INNOCENCE slow and too nuanced, then SILENCE isn't for you. But if you like spending time staring at paintings in museums, uncovering depths maybe even the artist didn't intend but that bring a kind of creative fulfillment to you (I'm guilty), then I think you will be able to surrender to the pace and the ignore the miscasting to ultimately experience a worthy work of art, despite its few limitations, or maybe a better word is challenges.
Posted by Lally at 3:40 PM