In talking with my great friend Terence today about the new HBO series THE PACIFIC, which I've already posted that I'm digging, I shared that I've been watching the first several episodes over again and getting more into them and understanding what's going on better.

I don't know if it's the aftermath of the brain surgery or if other people are experiencing this, but I'm having trouble sometimes understanding what people are saying when I'm watching movies on TV these days. Some of the words and even entire lines get lost somehow in the sound mix, or in my head.

But why I bother to go back and watch episodes of this particular filmic venture over again is that my second oldest brother James, who we called "Buddy" to distinguish him from my father, also James, was in "The Pacific" toward the end of WWII.

The government had a policy in the last year or so of the war that allowed high school seniors, and even juniors old enough, to join the service and automatically receive their high school diplomas. My brother Buddy opted for that and joined the Navy.

He was a musical genius, in my humble opinion, which comes from some knowledge of music and musicianship. Just one example, when I joined the service almost two decades after he did I was playing bass, the upright acoustic kind of bass jazz musicians played then (I had started out on piano, which remained my main instrument, but had fallen in love with bass because of my love for musical creators like Charles Mingus and Paul Chambers.

But I wasn't about to lug an instrument that big and cumbersome around in the service, even if they'd let me, so Buddy said he'd take it off my hands and if he could play it and get jobs on it he'd pay me for it (in installments, he was the most practical of all of us).

At the time he'd already proven himself as a great "reed man" playing mostly alto and tenor saxes but also clarinet. He had become one of the leading members of the musicians union in Washington DC where he settled after the war, using the G.I. Bill to put himself through Catholic University where he majored in music. He was often picked as leader of combos that backed the stars when they came to DC to perform, like Sammy Davis Jr. and Pearl Baily.

But being leader meant a lot more responsibilities for not much more money. He thought by playing bass he'd not only get more jobs—because a bass player's always needed but not necessarily a "reed man"—but someone else would be leader and he could just arrive for the gig and split afterwards which would give him more time for his other gig—bandmaster for a high school outside DC in rural Maryland—a tough, poor, underachieving high school the way I heard it.

[And the point I meant to make here and missed in my first attempt: within two weeks he was not only playing the bass well, but well enough to begin getting top jobs with it!]

He was so good at that high school bandmaster job the band appeared often on TV when I was a kid, playing the Macy's Parade in Manhattan and the New year's Rose Bowl Parade (or whatever it was called) in Florida and other televised parades. He had been invited to be the second clarinet chair for the Cleveland Orchestra too but turned it down on our father's advice who didn't want him living so far from Jersey or having such an unreliable job (as my uneducated father saw it) so encouraged Buddy to become a teacher in order to always have steady work.

For years and years he went to night school while teaching music during the day at that high school and playing gigs on weekend nights, until he eventually got a Ph. D. in education. After which he became a highly respected high school principal. But back in the last year of WWII he was just s scared teenager on a ship in a convoy on its way to Okinawa and afterwards onto the expected invasion of Japan.

But first Okinawa had to be subdued. He wasn't a fighting man, but a great musician in a small Navy Band used for various rituals (flag raising, etc.) on the Island behind the lines, but close enough to hear the guns and bombs. He witnessed some pretty horrendous things for a kid to have to see, though not as bad obviously as the marines in THE PACIFIC.

Just thinking of my brother being in a tent like them and in the same climate in the same war experiencing some of the same things, including some frightening and horrific things, drew me into the story in a way nothing really ever has. I can't wait for each new episode, in fact I don't wait, I rewatch the earlier ones and, like I said, get even more out of them. It's a stunning achievement to my mind and taste.

I feel like they really capture a lot of what I heard from my brother and other older guys from the clan and neighborhood who were in the war. Part of that is some great producing and part of it is relying on firsthand accounts from two of the main characters in the series, and firsthand accounts for the other main characters. I commend the young actors who are doing such a terrific job, and the directors and writers for making it really seem like the real deal. 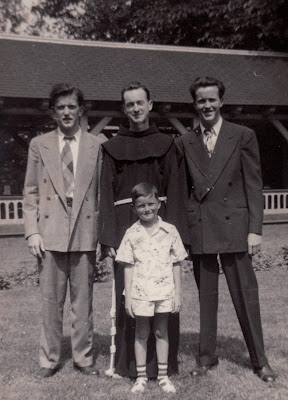 This photograph above I'm pretty sure was in Butler, New Jersey, four years after the war, which would make my oldest brother Tommy, who by then had chosen the name Campion as a Franciscan Friar (and in a few more years would be ordained a priest) around 23. To his right over my right shoulder (I'm the little guy, around 7, in an outfit my mother loved) is our brother Robert (actually "William Robert" which he would only discover was his real name the following year when he was drafted after the Korean War began) around 19, and to their left over my left shoulder is Jimmy, or "Buddy" as we knew him, around 21 and probably still a student at Catholic U.
Posted by Lally at 10:21 PM

Same "wise guy" grin at seven that we all know and love.

Dad you can see a lot of Flynn in your face there. And, man your brothers look sharp!

I also was raised Catholic..how weird was that to have a brother who was a priest? I am remembering the absolute power and mystery of the priesthood.
Were your parents happy he joined? .
Tony wanted to be a priest. His mom told me when he was 13, some Franciscans from Santa Barbara knocked on their door and said they were there for Tony. Apparently Tony had arranged it all himself without consulting his parents. They were gob smacked, despite being deep into Catholicism.
Tony stayed till he was 16 and left he says because he heard the Beatles music and knew he couldn't stay.
suzanne

Thanks guys. And Suzanne, thanks for that insight into Tony's past. That explains a lot! (just kidding).