Poet and translator Vincent Katz's Libellum press is proof that fine book making is not only not dead but alive and dancing.

[Full disclosure, as they say these days, means I tell you here that the first book from this press, which came out of the equally original literary magazine Vincent started—VANITAS—was the first publication of the long poem I wrote for a reading Vincent organized on the eve of the invasion of Iraq and titled after the date of that reading and actually the day I finished the poem: MARCH 18, 2003.}

The two latest publications from Libellum solidify that burgeoning reputation of the press as not only successful at creating fine books but at making available fine poetry.

Poet Tom Clark has been the main contributor to the Vanitas blog and is the sole contributor to his own poetry blog—TOM CLARK/BEYOND THE PALE—which to my mind is the best strictly poetry blog (where you go to read poetry, not opinions about it ala this blog) on the web.

Now they've come together in the form of two books—THE NEW WORLD and TRANS/VERSION. 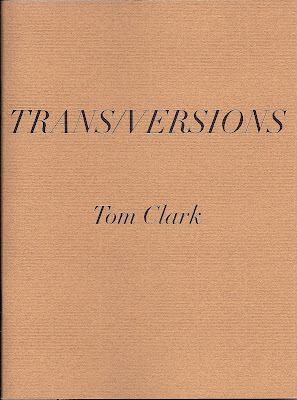 The latter is what some folks call a "chapbook"—meaning it's a very slim volume with a "saddle stitched" binding (meaning the pages are held together by two staples in the center of the middle two-page spread over which the pages are folded) and contains seven poems based on or translated from poems from other languages, including from the French (Baudelaire, Rimbaud, Mallarme and Reverdy), Spanish (two poems by Vallejo) and German (Brecht).

They are delightfully insightful into the original intent, I believe, of the poets and of Clark's capacity for a kind of wisdom that few poets ever attain but most seem to always be writing as if they have. But Clark rarely if ever comes across as the sage, more like the older version of the guy who first made his mark as a humorous but brash young poet of the late 1960s and early '70s whose work fairly jumped off the page with the vitality of those times. 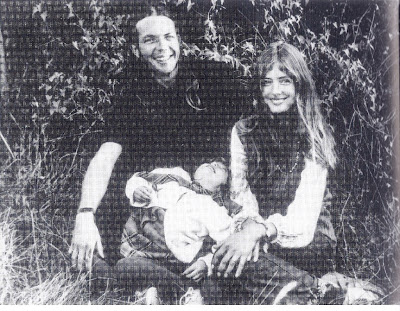 I first learned of him as the poetry editor of The Paris Review who replaced the outdated stolid seriousness of poems based on what seemed by then ancient rhythms and/or self-serious ponderance with lighthearted, witty, and often close to incomprehensible experiments with language and subject matter that matched the musical soundtrack of those years.

He introduced us all to poets and styles that were what a lot of us had been trying to do ourselves or had at least been looking for and hoping others would discover and share, and there they all were, or a lot of them, in the poetry published in The Paris Review in those years.

I heard at the time that he came from a family with cops, as I did, only in Chicago or its environs while I was back East in Jersey and he was based in England at exactly when that city was the center of the musical changes that those years brought while I had yet to venture outside the states (and was proud of that in my clinging to the belief that where and who I came from was as great a subject matter as any classic).

I had a slight chip on my shoulder about what I took as the sophistication a guy my age, or very close to it, had to have to be able to pull off becoming the poetry editor of The Paris Review at such a young age. (as well as for the fact that he never published any of my poems in the mag over those years though I truthfully don't remember if I ever even submitted any but feel like I did!)

I also had a lot of admiration for the way he had turned that magazine on a dime, as they say, to bring a bastion of the less radical experimentation of the 1950s generation into the new day the 1960s had become. I was totally impressed that they let him do it.

I remember being in "The Community Bookstore" in DC that I helped create and was running with others around 1971 when I met the younger poet Bruce Andrews there and one of his intricate little poem machines had just been published in The Paris Review, a poem that was so new in its approach that the style didn't have a name yet but would later be called "Language Poetry" meaning poetry based more on qualities of language other than meaning (see this past Sunday's New York Times Book Review article on Charles Bernstein's selected poems for an example of how far that style has come).

Over the years I've followed Clark's progression through the poetry world as he moved back to the states, kept creating engaging poetry and in the '90s and whatever-we're-calling-the-first-decade-of-the-2000s worked for Black Sparrow Press including during the years when they were folding after including in their roster two big collections of mine (IT'S NOT NOSTALGIA and IT TAKES ONE TO KNOW ONE).

Now, through his poetry blog BEYOND THE PALE he has become the sage our age needs (I mean "our age" as both these times and his and my actual years alive) and these two books demonstrate that for me. They still have a kind of ease with language that makes a lot of his lines seem conversational and simple, sometimes to the point of seeming obviousness, but then, there'll be that little or not so little turning on-a-dime that transforms what seemed simple and perhaps a given into something so much more subtle and graceful in ways only poetry seems capable of.

The poems in THE NEW WORLD capture that well, especially the ones that are more narrative, little stories about the people he encounters on his rounds in what I take as Berkeley, encounters that reveal the humanity in us all as well as the contradictions and challenges of accepting that. These poems in particular work as mini-movies for me, developing characters through close observation of their interactions and a story line that adheres to reality but nonetheless has an arc of narrative drive that satisfies.

They're too long to quote any in full (only a page or so but still) so here's a complete section (#4 titled "Flash Player 2008") from a different kind of narrative poem, the serial poem "A Retrospect" that opens the book (right after the earlier black-and-white family photo above that compliments the color one on the cover):

Strange to turn to old ghosts, watch ourselves dissolve
In their eyes. They were not here to help us,
Merely to drag us back against our will
Into a dim becalmed past, then forward into
Occluded presents which yet feel too bright.

(I can't get my italics thingee to work so just imagine those last three words in ital.) 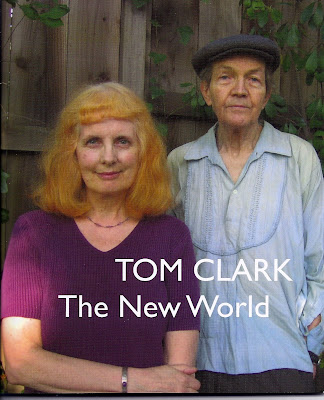 Okay I've gone on too long for a blog post as I'm always being told I do, and I don't want to make any other poet I've written about whose work I dig as well feel slighted. But I did want to say to anyone interested that these two books are the kind of treasures many book and poetry lovers I know delight in, because they are satisfying simply as objects, let alone for the original and often profound gems that can be found inside them.

[Here's another take on Clark's recent poetic and writerly output.]
Posted by Lally at 10:53 AM

Michael thanks so much for this, the best gift one could get on yet another rainy day here in humanity. Yes I think we've both been there all the time. Though I am a bit surprised we are both still alive, after all these years of humanity. Still there it is. And I love the way our glances obliquely converge in the conjunction of your two old book covers and that even older G. Malanga photo of my little post Grant Wood family unit, smiling at the edge of the world. Would that it were so easy any more. And by the by, if indeed you did send poems to The Paris Review, it may or may not be a relief for you to hear that I never saw them. In the second half of my decade of tenancy in that curious position there was a first reader, Ron Padgett, so that instead of seeing ten thousand poems a month, I only saw a few hundred. As we are both aware, a lot of gold always slips through the meshes of even the most intelligent sieve.

In any case many thanks again (and no, I don't think your post was too long, oh no!).

Affection & respects as ever,

Tom,
My pleasure and honor. You're one of the "essentials" as they say on TCM. And grateful to share the journey in the slant rhyme ways we do.
(No one would ever suspect that as far as I can remember we've never even met "in person"—though that expression is inadequate to so many I feel I know so intimately as fellow poets whose work is as much a part of my life as the music that marks its milestones.)
Michael