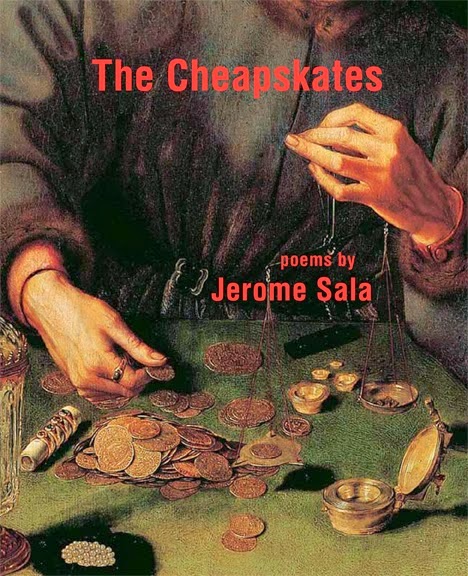 I'm an old friend and an old fan of Jerome Sala and his poetry. Ever since his first books, SPAZ ATTACK and I'M NOT A JUVENILE DELINQUENT. Because he's a very smart and a very smart ass poet. But I have to say his newest collection, THE CHEAPSKATES may be his smartest and most smart ass book yet.

CHEAPSKATES just may be my favorite book of Sala's. To my mind it's the one where all his intelligence and insight and brilliant cultural assessments (you can check them out on his blog ESPRESSO BONGO) combine to make an incredibly intellectually satisfying collection of poems.

Here's three of the shorter poems in CHEAPSKATES as examples:

Now people like that
probably only steal your iPhone on the subway platform.
That is, unless they push you on the tracks.

It's true they got to do more
of what we wanted to do
and with who, and when

but for all that, we didn't feel
they were better than us
more beautiful, sure, but

wasn't that bionic anyhow?
So the perennial question was
why them? Followed by why us?

and who were we, stars
in our own tiny dramas,
living fully without them,

but needing them, at the same time,
as a reminder that even the great
weren't all that special?


There are longer poems and more dense poems that contain  much more surprising juxtapositions of philosophical inquiry and pop culture symbolism, or metaphoric economic commentary and real politik etc. but the above three seemed like quick and easy synopses of Sala's attitude and perspective, crisply clear statements of poetic intent. Pick up the book to see more poetic slight of hand than you may have expected.