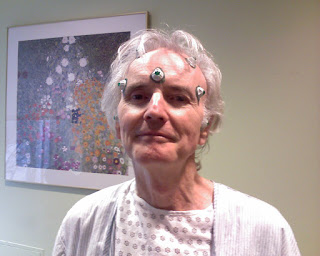 Seven years ago this month I had my brain operated on (this is me pre-op) and for months afterward struggled to regain some crucial mental faculties, like the ability to read or watch TV or movies or listen to music. I was overwhelmed by the complications of anything nuanced or multi-faceted. Like it took a while to be able to watch anything on TV and then when I could it had to be old movies in black and white with confined settings and extremely simplistic plots.

It took quite a while, for instance, to be able to watch The Daily Show with John Stewart. When I first tried my head felt like it was going to explode from the pain and confusion and anxiety caused by the layers of irony his show regularly contained. Which gave me an insight into the minds of some right-wingers which I can apply today to Trump supporters who are angry at Hilary for supposedly being dishonest despite the fact that she's one of the most honest candidates who ran this year and Trump is hands down the mot dishonest. How to explain that cognitive dissonance?

From my brain op experience the explanation is simple. It hurts too much to try and sort out the multi-layered intellectual aspects of Hilary's policy statements and laundry list of plans and perspectives she articulates and embodies. But Trump makes it easy. Short, staccato, simplistic statements—even when totally contradictory to other short, staccato, simplistic statements within the same speech—express anger that is obvious and clear and simple, so his supporters can think, hey I'm angry too, this guy speaks for me. Hilary's anger, when she expresses any, is way more nuanced and multi-faceted, demanding interpretation and analysis, extended reasoning and retention of multiple facts and references.

When I could finally watch John Stewart again it was a relief, but I was much more aware of how his humor, like Hilary's speeches, require a baseline acceptance of a complicated worldview based on wide a wide knowledge of facts, not just feelings and generalities and simplistic solutions. Build a wall. Ban all Muslims, etc. The Dems used to be experts at keeping their message simple and accessible, but too often in recent decades they seem compelled to complicate simple messages with all the nuance reality includes but politics can't contain without losing a whole contingent of humans whose brains actually hurt when confronted with so much to take in.
Posted by Lally at 10:52 AM