THE IRISH AND HOW THEY GOT THAT WAY 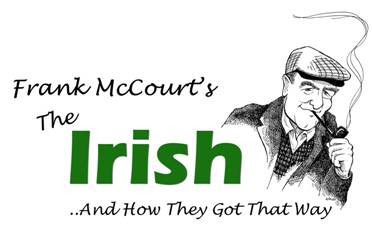 THE IRISH AND HOW THEY GOT THAT WAY is a musical/historical revue written (more like compiled) by Frank McCourt, the author of the popular and now classic memoir ANGELA'S ASHES. The latter in many ways began the modern trend of memoirs outselling fiction (and their veracity being questioned—in ANGELA'S ASHES case not the facts but the details—how could he remember exact dialogue from when he was a boy half a century earlier? etc.).

There is a revival at the Irish Repertory Theater in Manhattan of this stage piece, which has been performed widely including on PBS. I saw it last night with my good friend, the poet and traditional Irish music songwriter and performer Terence Winch, and his son Michael, an amazing traditional Irish musician himself—mostly on the fiddle— and my youngest, who enjoyed it thoroughly (my youngest that is, as did Terence and I, though Terence's son may well have rather been somewhere playing Irish music himself than watching a cast of actor/performers entertaining a mostly white-haired audience).

It occurred to me during the show, where a cast of two men and two women singer/dancers, along with a musical director piano player who led the songs and another musician—mostly on fiddle but occasionally the mandolin and bodhran, the Irish drum—used old Irish and Irish-American songs to illustrate Irish and Irish-American history, that this may be the easiest way to make what colleges used to call a history survey class palatable to the growing non-book bound student population, like my youngest.

And that's not a bad idea. I suspect my little guy learned more about the history of the main strain of his ancestry in a few hours last night than he might reading several thick tomes over the course of months and years. I'm a book lover and a book writer so I'm not saying I think he or anyone else shouldn't experience the pleasures and satisfaction of all that books can offer, but he has some problems, actual clinically diagnosed problems, with some of that, and if he can compensate for it by a musical revue on stage (or screen or computer), more power to the revue I say.

In a way, I felt the experience of seeing my son's attention and intelligence engaged by the combination of song and dance, speeches, dramatized readings and historical narration was seeing the future. Not the specifics of the technical aspects of the old fashioned revue, but the idea of summarizing, with specific details as well, through entertaining means the knowledge we want our children to have access to and familiarity with.

As for this production, it's probably not quite as exciting and fresh as the original was, but it'll do. The two lead men—Ciaran Sheehan and Gary Troy—were terrific, Troy embodying what used to be called the "bantam" cockiness, physically and attitude-wise of Jimmy Cagney and that whole old early 20th-century style, very appropriate, while Sheehan (who's the only cast member from the original production in this revival) had the pure Irish tenor tone and musicality to manage to bring me to tears with the now cliched "Danny Boy"—his rendering so totally controlled and precise and understated, I can't think of a better rendition out of all the times I've heard this old chestnut.

The two lead women, Kerry Conte and Terry Donnelly matched the men in enthusiasm and personality and in Conte's case in musical vocal technique and in Donnely's case in role-and-accent shifting trouper virtuosity. The musical director piano player Kevin B. Winebold unfortunately couldn't match the leads' stage presence or vocal agility and talent and kept reminding me of the lead character in WAITING FOR GUFFMAN which was a little, but only a little, distracting.

I heard enough to know that the other musician, Patrick Shields, is probably a fine violinist, but Terence's son could have shown him a few things about Irish fiddling and Terence's brother Jesse could have taught him some improved technique on the bodhran and maybe he wouldn't have been as tentative on it.

If I had any input into this show I would have included a few details and facts McCourt left out (and as Terence pointed out, not cut some of the songs, as in leaving out the most poignant line in "Galway Bay" about how "the strangers came and tried to teach us their ways") and shaped the ending differently (it featured a U-2 song that seemed tacked on later and Terence wondered if it was even in McCourt's original production). But overall the production was worth the time and money spent and the experience in general was a delight, sharing our common history with my best friend and his son and my youngest, I only regret my older son and daughter weren't experiencing it with us. But maybe they will some day too.

[PS: The sweetest moment of the evening may have been when they the performers went through a list of important Irish and Irish-Americans and my young son leaned over and whispered in my ear "and Michael Lally and Terence Winch!"]
Posted by Lally at 8:53 AM

Dear M:
It was great to see you & the younger Mr. Lally last night. I share your take on the production's strengths & weaknesses, but, all in all, I think it's worth seeing.
Up Galway!
yrs,
TPW

Dear Michael,
I can't think that McCourt's perspective is good for much, though I'm basing this on his books. I haven't seen the show. And I hope you're wrong about the future of knowledge accession, though we are indeed swimming upstream against a river of shit. (As somebody said recently, it's not attention deficit but attention that's the new disorder.) No one can tell me that there's a better way, for example, to understand northern NJ Irishness than "South Orange Sonnets." And as for I-A wit, give me Terence Patrick and Bill Maher any day. The McCourts just ain't in it. Greetings, and I hope you are well.
Charlie Fanning

Charlie,
Great to get your comment and coming from a scholar like you I have to concede. But the reality is, my poetry (and plays for that matter) or Winch's doesn't and may never have as big an audience as McCourt's writing so if that's the only place the kids get their understanding of Irish and Irish-American history from, I guess I'll try to make the best of it!